Influence of a dammed reservoir on nutrient (N, P, Si) loads and ratios of the Thames River, Ontario 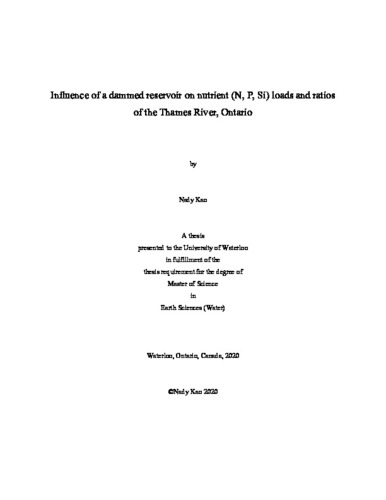 The increasing frequency and severity of harmful algal blooms (HABs) in Lake Erie have been troubling developments in the past few decades. Excess loads of phosphorus (P) from the watershed are considered to be a primary driver due to the role of P as a limiting nutrient for primary production. Additionally, the roles of nitrogen (N) and silicon (Si) on HABs have generated considerable research interest recently due to the influences of N:P:Si ratios on phytoplankton community composition and algal bloom toxicity. The Thames River, in southwestern Ontario, is a significant tributary source of nutrients to the western basin of Lake Erie from the Canadian side. Evaluation of nutrient sources, loads, and reduction strategies within the Thames River Watershed are therefore critical to guide management strategies to mitigate HABs in Lake Erie. Currently, the majority of nutrient management strategies focus on limiting nutrient loss from the landscape without considering the effects of dammed reservoirs along the river corridor. On a global scale, dammed reservoirs attenuate N, P, and Si fluxes and have also been shown to alter nutrient speciation through physical and biogeochemical processes. However, in-reservoir retention efficiencies are highly variable and may fluctuate between source and sink. The influences of Thames River’s largest reservoir, Fanshawe Reservoir, on nutrient loads, speciation, and ratio have not been fully evaluated due to a lack of primary water chemistry data. In Chapter 2 of this thesis, I evaluated Fanshawe Reservoir’s influence on Thames River’s P flow on annual and seasonal time scales by 1) quantifying the reservoir’s P retention efficiencies using a mass balance approach, and 2) assessing the changes to P speciation using the ratio of dissolved reactive P to total P (DRP:TP) as an indicator of load bioavailability. Annually, Fanshawe Reservoir functioned as a P sink by retaining 28% (41 tonne) and 48% (92 tonne) of TP loads in 2018 and 2019, respectively. Seasonally, the reservoir altered between a sink and a source of P. Net P releases occurred during the summers of 2018 and 2019 and the spring of 2018, driven by internal P loading and increased discharge from the dam. The reservoir did not exert a strong influence on DRP:TP annually, but increases were observed during both summers. The findings of this chapter demonstrate that Fanshawe Reservoir is an important P sink on the Thames River, with further influences on the timing and speciation of P loads. In Chapter 3, I assessed Fanshawe Reservoir’s influence on N:P:Si ratios of nutrient fluxes on the Thames River by 1) calculating the reservoir’s dissolved inorganic N (DIN), dissolved inorganic Si (DSi), and DRP retention efficiencies, and 2) comparing DIN:DRP and DSi:DRP ratios between inflow and outflow nutrient loads. Additionally, I identified the general transport behaviors of DIN, DRP, and DSi by analyzing their concentration to discharge (CQ) relationships. From 2018 to 2019, Fanshawe Reservoir retained DRP (28.6%) and DSi (5.6%) but released DIN (-6.2%). The preferential retention of DRP over DIN and DSi increased DIN:DRP and DSi:DRP ratios leaving the reservoir, and potentially increased N availability and P limitation in downstream water bodies. Increases to N availability could intensify algal bloom toxicity, however, P retention by the reservoir may offset the extent of eutrophication. Upstream of the reservoir, DIN and DRP exhibited mobilization transport behaviors, and DSi was chemostatic. Downstream of the reservoir, DRP shifted to chemostatic, likely due to in-reservoir processes of internal P loading during the low flow summer and enhanced retention during high flow events, both of which decreased the long-term variability of DRP concentration with flow. Overall, the findings of this chapter show that Fanshawe Reservoir is decoupling Thames River’s nutrient flow by altering both the quantity and ratio of nutrient load. The combined findings from Chapter 2 and 3 indicate that Fanshawe Reservoir exerts a major influence on Thames River’s nutrient flow. To help mitigate excess P loads to Lake Erie, in-reservoir P retention may be enhanced through nutrient management strategies within the reservoir, in supplement to land-based strategies that are currently in place. Changes to N:P:Si ratios through preferential retention of P over N and Si, however, may lead to adverse effects in downstream water bodies, and highlight the need to establish dual nutrient reduction goals addressing both excess P and N with the watershed.