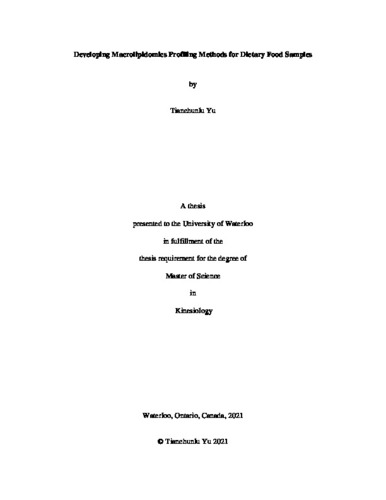 Diet has a major impact on health and disease and poor nutrition increases the risk of chronic disease. The amount and type of dietary fat has been a key target for dietary guidelines and health policy. Dietary fat in the food databases and on food labels is usually analyzed and described by the fatty acid composition of the fat, but dietary fat is a mix of fatty acyl specific species of triacylglycerols (TG) with minor contributions from other complex lipids such as phospholipids. The actual native lipid species information can be captured with a “macrolipidomic” approach that characterizes the individual fatty acyl species of the highly abundant lipids of a biological sample and provides additional information and insight about the dietary form and source of important nutritional fatty acids such as omega-3 polyunsaturates. The overall purpose of this thesis was to assess the ability of and identify challenges with the use of a macrolipidomic analytical approach for the characterization of dietary lipids by analyzing food items and meals. Tandem mass spectrometry coupled to ultra-high-performance liquid chromatography was used to characterize the dietary lipid species in individual food items and meal homogenates and compared with traditional fatty acid profiles generated by gas chromatography-flame ionization detection and food profiles from the Canadian Nutrient File database. Analyses were performed on two highly consumed commercial plant oils (soybean and canola oils), a breakfast sandwich, and homogenates of traditional Canadian versions of breakfast, lunch, snack and dinner. The fatty acid profiles of the plant oils differed with 18:2n-6 (54 wt%) being the main fatty acid in soybean oil and 18:1n-9 (62 wt%) in canola oil but there were no fatty acids detected that were unique to an oil. Lipidomic analyses revealed the two oils shared only 56 identified acyl lipid species with soybean oil having 105 and canola oil having 105 unique lipids. For the sandwich and meal analyses, that the fatty acid content by biochemical determination was lower than the Canadian Nutrient File estimates. Blending and homogenizing large volumes of mixed food items was a challenge and requires additional processing strategies in the future that need to be evaluated. The macrolipidomic analysis of the breakfast sandwich and the meals confirmed phospholipid content in the diet with egg likely being the main source, but there were challenges with quantitation. Macrolipidomics estimated that 2.7% breakfast sandwich lipid was phospholipid while gas chromatography determinations estimated the 17% of the fatty acids were associated with phospholipids. The extent of the lipidomic profiling was also limited by challenges in making correct fatty acyl lipid species identifications as the processing software was unable to import MS/MS data acquired by data dependent acquisition. Despite this, it was estimated that in meals that mimic a typical Canadian diet, the most abundant lipid consumed was TG 18:1_18:1_18:1 at 12.6 g/d. These macrolipidomic studies provided a better understanding of the challenges in adapting lipidomic analyses to nutrient profiling. Advances in lipidomic methodology and data processing are still required and experiments assessing of food homogenization techniques and the impact of this sample preparation at the lipidomic level are necessary before large scale lipidomic profiling of the food supply is attempted.