The Relative Performance of International Students and Their Academic Program Choices 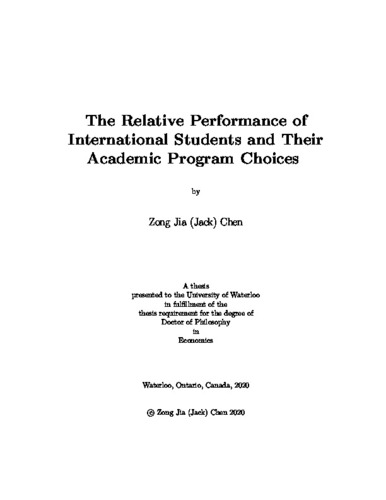 Canada is increasingly looking to international students as a source of postsecondary tuition revenues and new immigrants. In Chapter 1, we examine the relative course grades of international undergraduate students in an Ontario university with a large and growing foreign student presence. We identify grade gaps across fields of study, which appear to primarily reflect admission errors from less predictive secondary school grades. While the gaps appear related to English-language proficiency, they are larger among graduates of Canadian secondary schools and in upper- than in first-year courses. Our estimates also suggest that relative foreign student quality has improved over time, despite increasing foreign enrolment. The academic programs that students choose to pursue have strong implications for their career prospects. In Chapter 2, I shed light on students’ academic program choices by examining how co-ethnic peers influence their decisions to change programs during the course of their undergraduate studies. Examining data from a publicly-funded Ontario university with an ethnically diverse student population, I find that students are highly ethnically concentrated within academic programs at the time of their initial enrolment. Moreover, nearly one-quarter of all students change programs at least once during their studies and these program changes further increase the ethnic concentration of students within academic programs. Assuming a model in which students prioritize their grades over co-ethnic peers, the presence of more co-ethnic peers is found to significantly increase the probability of a program change. This suggests that the ethnic concentration of students across programs at the university, which appears to increase over time, may be academically and socially efficient. International students are considered to be the best source of immigrants. In chapter 3, we compare the labour market performance of former international students (FISs) through the first decade of the 2000s to their Canadian-born-and-educated (CBE) and foreign-born-and-educated (FBE) counterparts. We find FISs outperform FBE immigrants by a substantial margin, but underperform CBE graduates from similar postsecondary programs. We also find evidence of a deterioration in FIS outcomes relative to both comparison groups. We argue that this deterioration is most consistent with a quality tradeoff as the supply of international students has not kept pace with the growth in demand.