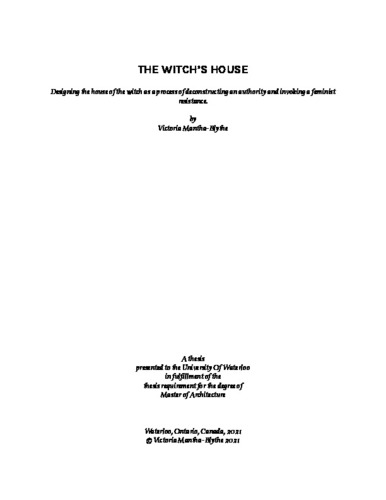 The site of this thesis is the witch’s house. A dissident and agitator in society, the witch and her respective home are both grounds for resistance and a place of refuge. The Witch’s House is a playful and experimental investigation of feminist architectural principles explored through narrative, writing, and drawing. Designed as an antithesis to the societal frameworks that continue to constrain women’s potential – both metaphorically and spatially –, the witch’s home is a speculative architecture. From a place of hopefulness and feminist values this thesis furnishes a safe space for intelligent, old, wise, and sexual women who are unafraid to dislocate systems of oppression. I assemble fragments of knowledge – in the form of suppressed women’s history, feminist artwork, critical architecture theory of sexuality and space, and theories of abjection – to weave an architectural bricolage of the witch’s house in three forms. Drawing from the dominant and disparaging depictions of the witch figure in Western and Northern European 19th century fairy tale compendiums, I identified the cave, forest, and hut as three typologies of the witch’s house. I transform these threadbare clichés of the witch’s home into textured narratives centering the perspective of women’s resistance as complex spatial relationships intertwined with social, ecological, economic, and spiritual implications. Through this method of assembling I deconstruct an authority to forge a new understanding of enclosure, materiality, connection to nature, tectonics, and domesticity that is rooted in women’s innate and ancestral power. The Witch’s House is partitioned into four parts. Part 1 distinguishes the witch as three characters: the wise witch – the untold narrative of women’s power and their role as seers, diviners, and healers; the historical witch – as documented in European texts and illustrations; and the feminist witch – who has been reclaimed as an icon in feminist literature and art. Part 2 explores the intersection of this witch figure with the typification of the house as a site for critical architectural discourse and analysis. Within this section I explore the methodologies of my work while substantiating the role reading, drawing, and writing played throughout the design process. Part 3 presents designs for three distinct houses: the Pyre House, the Weaver House, and The Cave House, each comprising a set of drawings, a collection of zines containing treatises towards a feminist architecture, and reflection on the design process. Following these designs, Part 4 is an appendix of all the zines that supplement the drawings, serving as a library of resources in defense of the witch’s house. I invite any who wish to traverse The Witch’s House to ramble and tramp in no certain order through the pages – flipping back and forth between drawings, zines, and writing – creating their own narrative territory of the witch and her house.