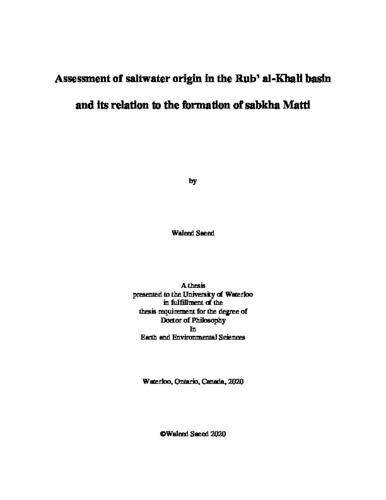 The Rub’ al Khali sand sea is the largest uninterrupted sand desert on Earth that occupies an area of approximately 650,000 km2 of the Arabian Peninsula. Yet, the desert basin is underlying by one of the largest multi-level aquifer systems of the arid world that is the Rub’ al Khali (RAK) structural basin. In this study, water resources in the Cenozoic aquifer systems within the RAK basin were assesses using a combination of geological, hydraulic, hydrochemical, and isotopic approaches. The main goal of this research is to initiate the building of a conceptual model of the regional hydrogeology of the RAK basin in order to assess the constraints and opportunities of the available water resources for future developments. The study shows that the RAK basin is a potential source of fresh to brackish water, with total dissolved solids concentrations (TDS) less than 10,000 mg/l. However, groundwater with up to 200,000 mg/L TDS has been found in the vicinity of a potential discharge zone, known as sabkha Matti. An isotope and solute evaluation was applied to identify the origin and mechanisms of this salinization in three major Tertiary aquifers in the RAK basin. The studied geological succession comprises sedimentary rocks of the Lower Paleocene to Lower Miocene age, and the aquifers primarily consist of the Umm Er Radhuma, Dammam, and Hadrukh. It is demonstrated that the groundwater chemistry evolved from a low- (< 2,000 ppm) to high- (>120,000 ppm) salinity Na-Cl water type, regardless of the aquifer. The similarity in water types between the groundwater from the different formations suggests that the same origin and geochemical processes may be controlling the salinity and major ion chemistry in these aquifers. The suite of hydrogeological, hydrochemical (Cl vs. Br), and isotopic (Cl vs δ18O and Br vs δ81Br) data indicate that the source of solutes is associated with the entrapment of evaporated paleo-seawater (connate water) in nearshore and lagoonal environments during the time of deposition. Moreover, the results from the 87Sr/86Sr ratios show no evidence of significant vertical connectivity between the three Tertiary aquifers. Instead, the data support that evaporated paleo-seawater was trapped in each aquifer individually during the time of deposition, and that each has evolved similarly through water-rock and redox reactions. The stable isotopic compositions of δ18O, δ2H, and 14C show that the entrapped paleo-seawater was partially flushed out by fresh meteoric water during the wet Late Pleistocene and Early Holocene periods. Sabkha Matti (SM) is a flat salt covered portion in the further northeastern part of the Rub al Kali sand sea and is underlain by the larger RAK structural basin. SM is the largest continues salt flat in the Arabian Peninsula and it extends about 150 km south from the western Abu Dhabi coastline and across the border between the United Arab Emirates and Saudi Arabia. The Matti sabkha is a potential discharge point for regional groundwater systems in the RAK topographic basin. The hydrogeochemical evolution of this sabkha and its role in the regional hydrogeological system of the RAK basin was assessed by using a combination of geological, hydraulic, hydrochemical, and isotopic approaches. A compilation of the geologic structure and lithology in combination with boron isotope data attributed the origin of salinity in the regional aquifers underlying SM to the entrapment of ancient seawater in a coastal lagoon environment during the depositional time of the late Oligocene-Miocene formations. Major ionic constituents and strontium isotope ratios from the trapped paleo-seawater were observed to resemble those obtained from the near-surface sabkha brine. These data, along with hydrostatic head measurements, suggest that the origin of the solutes in SM is associated with brines ascending from the underlying formations. The data also show that solute concentrations in SM are increasing over time through a combination of evaporation, mineral dissolution by recharge, and density-driven convection mechanism that circulates the solutes. On the other hand, stable isotopes of waters (δ18O, δ2H) and radio isotope data (14C and 3H) suggest that the existing waters in the sabkha and the underlying aquifers are relatively recent and were recharged during the wet phase in the Late Pleistocene-Holocene between 3,200 and 14,000 BP. This study shows that the water and solutes in SM are a combination from different sources. Furthermore, A hydrologic budget was constructed for SM, where water fluxes were calculated on the basis of hydraulic gradient and conductivities measured in both shallow and deep wells. Evaporation rates from the surface of the sabkha indicate that the annual rainfall is lost by surface evaporation. Steady-state estimates within a rectilinear control volume of the sabkha indicate that about 1 m3/year of water enters by lateral groundwater flow; 2 m3/year of water exits by lateral groundwater flow; 20 m3/year enters by upward leakage; 780 m3/year enters by recharge from rainfall; and 780 m3/year are lost by evaporation. As per the source of solutes, the water flux multiplied by its solute concentration indicates that nearly all the solutes in the sabkha were derived by upward leakage from the underlying regional aquifers rather than weathering of the aquifer framework, from precipitation, or other sources.

Waleed Saeed (2021). Assessment of saltwater origin in the Rub’ al-Khali basin and its relation to the formation of sabkha Matti. UWSpace. http://hdl.handle.net/10012/16670