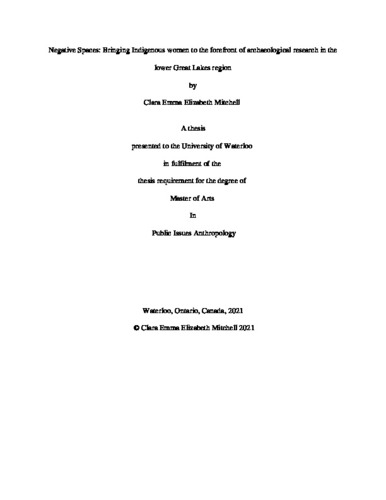 Indigenous women are underrepresented and/or stereotyped in the archaeological record with cultural remains often being interpreted as being inherently male. Previous to contemporary decolonial and feminist research, dominant androcentric and colonial frameworks were highly influential within the discipline and distorted the Indigenous past through the use of limited historical documents provided by colonizers. This reliance on primary colonial documentation has led to a restrictive interpretation of the past. Archaeological research that employs androcentric and colonial lenses negatively affects Indigenous women, both historically and contemporarily, by excluding them from their own histories and controlling public narratives. By providing a meta-analysis of trade goods in conjunction with contextualizing European’s imperious interpretations, this paper works to highlight potential roles that Indigenous women occupied and the ways in which they affected material culture that may not have been considered previously. Contrary to past interpretations of trade goods, it appears as though women would have had direct and long-term use with these materials, even having the potential to influence the types of commodities tradesmen brought to the metaphorical table.