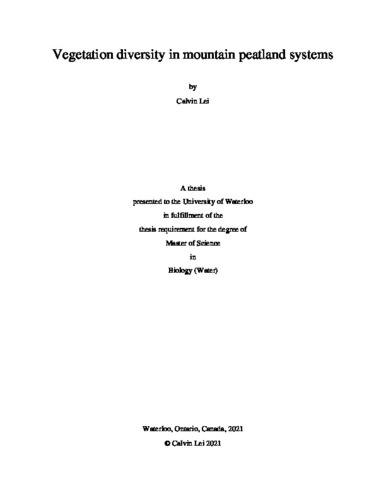 Mountain valley bottom peatlands are poorly studied systems, particularly in Alberta, Canada, where the provincial inventory has neither mapped nor characterized them. Nonetheless, these ecosystems provide valuable ecosystem services, including supporting biodiversity. Though elevation gradients are well studied in ecology, little is known about the drivers that determine the patterns of plant distribution in peatlands along an elevation gradient, nor do we fully understand the factors that influence plant survey efficacy and detection probabilities in peatland ecosystems. To fill these knowledge gaps, I conducted vegetation surveys at twenty mountain valley bottom peatlands sites ranging from 1415 – 1959 meters above sea level in the upper Bow River basin area of the Albertan Rocky Mountains. I recorded plant species identities and abundance data at each site using quadrat-transect surveys, and 15-minute timed walk surveys conducted by two simultaneous, independent observers. I present my results in two chapters. In Chapter 2, I describe and characterize the peatland vegetation communities along an elevation gradient to determine if the distribution of plant species is contingent on elevation, and to characterize how the distributions of plant species change along an elevation gradient. Contrary to my expectations, elevation was not the most important factor in predicting variation among my vegetation communities, based on my Mantel test, dbRDA and NMS ordination results. Rather, I found that pH and conductivity were more strongly associated with my NMS axes to explain more variation among my vegetation communities. Plant species responded individualistically to elevation in my LOESS elevation niche plots, suggesting a stronger effect of abiotic filters relative to biotic filters in structuring plant community composition in my mountain peatlands (i.e. the Gleasonian view of communities). Yet, I present some evidence that co-occurring species formed predictable, distinct assemblages in my mountain peatlands (i.e. the Clementsian view of communities), derived from my indicator species analysis. In Chapter 3, I determine potential sources of detection errors in peatland vegetation surveys and recommend an optimal strategy to minimize detection errors. Site species richness of vascular plants estimated using timed-walk surveys showed some pseudoturnover (i.e. differences in species lists between observers caused by imperfect detections such as errors of omission or errors of commission), but only using short survey times (< 10 minutes). Pseudoturnover averaged about 24% among my twenty sites, which was comparable to reported values in the literature, but these errors were ultimately corrected by using two independent observers. I also compare the timed-walk surveys to quadrat-transect surveys. I find little survey-method bias in missed detections, using a two-way repeated measures ANOVA to compare missed detections grouped by the growth forms (i.e. forb, graminoid, shrub and tree), and an indicator species analysis to compare the species detections by each survey approach. However, the two methods did identify distinct species and each has unique advantages and disadvantages in its implementation. Thus, I suggest future surveys of peatland vegetation employ combined survey approaches to ensure a robust and accurate measure of species richness and biodiversity. My research contributes to a better understanding of these mountain valley bottom peatlands by providing valuable vegetation data to ecologists and hydrologists studying peatlands in this region. Also, it provides methodological recommendations to future surveyors when studying peatlands to minimize their imperfect detections. My species lists and biodiversity data support stakeholders in determining the health of these peatlands and their abilities to provide ecosystem services and may also have conservation implications by identifying vulnerable species to extirpation.