A structural-metamorphic approach to deciphering the exhumation of the Gubaoquan eclogite in the Beishan Orogenic Collage, NW China 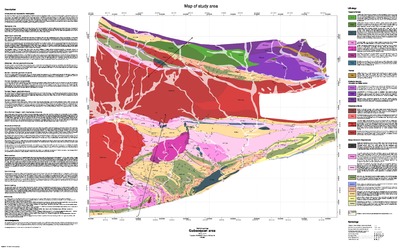 The Ordovician Gubaoquan eclogite is situated in the southern part of the Palaeozoic Beishan Orogenic Collage of the Central Asian Orogenic Belt in NW China. Mapping of an extensive section of the metamorphic tectonite belt around the eclogite and optical petrography have uncovered a high degree of fabric preservation, not recognised by earlier studies. The study area is underlain by a highly deformed belt of metamorphic tectonites, intruded by syn-tectonic granitoids. The belt largely consists of D3 retrograde fabrics, with only local preservation of D1 eclogite-facies fabrics in the cores of mafic boudins. Fabrics associated with D1- D4 document a clockwise metamorphic trajectory, characterised by eclogite-facies metamorphism followed by a large decrease in pressure and small decrease in temperature, high-temperature lowpressure conditions and greenschist-facies metamorphism. D2-D4 is associated with widespread NS shortening and local extension. SHRIMP U-Pb dating of zircon indicates felsic orthogneiss in the area primarily has Neoproterozoic protoliths, whereas metasedimentary rocks and metabasites primarily have Mesoproterozoic protoliths. Metamorphic zircon ages indicate a protracted metamorphic history from ~470 to 420 Ma. We propose that the metamorphic tectonite belt hosting the Gubaoquan eclogite represents Meso-/Neo-Proterozoic crust that underwent Ordovician-Silurian, north-directed subduction to various depths. The eclogite and its host were detached from the down-going slab, probably due to slab break-off, which also caused extensive syn-tectonic magmatism. Uplift and exhumation probably occurred in an extruding-wedge-type setting. Local convergence continued until the emplacement of the Silurian-Devonian granitoids. Afterwards, the area was tectonically quiescent until the Carboniferous-Triassic, when the area was exhumed.

Jordy de Vries (2021). A structural-metamorphic approach to deciphering the exhumation of the Gubaoquan eclogite in the Beishan Orogenic Collage, NW China. UWSpace. http://hdl.handle.net/10012/16655