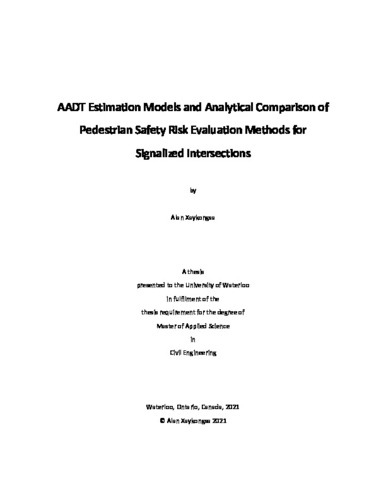 Pedestrian road safety is a priority for Canadian municipalities due to the particularly large social and economic impact that pedestrian-vehicle collisions can have on society. There is a constant need to improve roads to make them safer for all users, but especially for vulnerable road users such as pedestrians. Despite the existence of several methods to prioritize locations for improvements in pedestrian safety, there is no consensus on which method should be used. In this thesis, several methods were identified which could be used to prioritize sites for pedestrian safety improvement (i.e., network screening), specifically signalized intersections, using their geometric, operational, and land-use characteristics. Three methods were selected for further investigation, including the NCHRP ActiveTrans Priority Tool (APT), the FHWA Pedestrian Intersection Safety Index (Ped ISI), and the ODOT Pedestrian Intersection Risk Score. Traffic volume data in the form of annual average daily traffic (AADT) are required as input for these methods. Given that AADT are frequently not available for all intersections, another objective of this thesis was to develop a set of multiple linear regression models for the AADT of signalized intersection legs. Site data for both safety method application and AADT estimation modelling were collected for 438 Niagara Region signalized intersections from site imagery, GIS, and other online sources. Using existing AADT data as the dependent variable, six multiple linear regression models were developed. Each model is structured to be applied when different geometric, operational, and land-use characteristics are available as inputs. As one might expect, the models with the highest predictive power were those that also required the greatest amount of knowledge about existing conditions. Nevertheless, all models were shown to be statistically significant and provided reasonably strong to very strong predictive power. The AADT estimation models were used to estimate AADT for intersections for which observed AADT was not available. The pedestrian safety risk evaluation methods were then each applied to rank the 438 signalized intersections in Niagara Region. The potential for safety improvement (PSI) method was also applied to obtain a ranking based on collision frequency. Overall, the rankings were found to be very different between methods, as demonstrated by high measures of rank error (relative rank error weighted averages ranged from a low of 34% to more than 80%). This revealed a substantial challenge for practitioners as they would be faced with substantially different and inconsistent site prioritization results depending on which ranking method was chosen, despite all methods aiming to provide measures of pedestrian risk. To explain the differences in ranking between methods, the contribution of each method’s input variables and their correlations were examined. A combination of differences in the inclusion of input variables, their influence on the levels of risk for sites within a given method, and poor correlation among surrogate variables were suggested for the lack of similarity between rankings of different methods. The question of which method should be applied could not be answered. Several considerations for choosing a method were discussed. Further research into development of a robust pedestrian safety evaluation method was recommended.