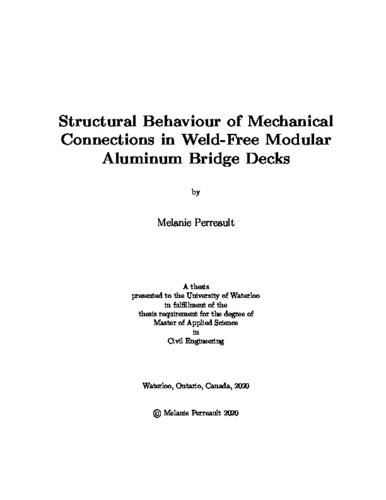 This research was done in collaboration with MAADI Group Inc. who designs and fabricates aluminum bridges. Aluminum in bridge engineering is effective since it is a lightweight and highly corrosion-resistant material. MAADI Group Inc. recently unveiled a new bridge deck product called GuarDeck®, which was designed for installation on steel girder bridges for pedestrians and occasional maintenance vehicle use. The structural behaviour of this new deck product is the focus of this research and in particular, the mechanical connections. The mechanical connections distinguish GuarDeck® from other aluminum deck products, which typically have welded components while GuarDeck® has none. GuarDeck® is composed of long extruded beams that are placed perpendicular to the flow of traffic and girders. The extruded beams are connected to form a continuous surface using tongue and groove connections that are part of the extruded cross-section. The deck is held in contact with the girders using stainless steel T-bolts and extruded aluminum clamps. The tightened bolt forces the deck and clamp to \sandwich" the top flange of the girder. No on-site drilling or welding is required. An isolation layer is applied to the clamps and beams to prevent galvanic corrosion between aluminum and steel. Experimental testing of the deck components in a laboratory setting under static loading was conducted. Two types of tests were performed: beam tests and clamp tests. The beam tests consisted of testing one or multiple simply supported, extruded beams with a point load in the middle of the span. The point load was representative of a small truck tire and smaller than the width of an extruded beam. The location of the tire load on the middle cross-section was varied. One beam tested by itself failed due to the rupture of the tension flange. Two beams connected resulted in either rupture of the tension flange or failure of the tongue and groove connection depending on the location of the tire load. Three beams with the load in the middle resulted in connection failure and a short beam held between two normal beams also failed due to the connection. A short beam was lastly tested by itself, which did not have a typical slender beam failure and failed by rupture of the top flange due to shear stress. The clamp tests were designed to test the deck-to-girder (DG) connections. Since the girder is sandwiched between the deck and clamp, friction between these components provide the resistance to applied forces such as longitudinal thermal expansion and vehicle braking. The tests determined the capacity of the connection in this direction. Additionally, isolation layers are applied to aluminum/steel interfaces which is nearly every interface in the DG connection. Two surface finishes on the steel plate were tested. The finishes were mill scale and sandblasted. The results showed that the connection reached a peak load then decreased gradually. The isolation layer was worn down and dust was observed beneath the specimens. Sandblasted specimens resulted in higher peak loads than the mill scale specimens. The beam test results were compared to predictions made using theoretical structural analysis methods. The tests were first compared to predictions made using the Canadian design code for aluminum structures (CSA S157) and then two types of finite element (FE) models. The first FE model was a three-dimensional model of the experiment made with two-dimensional shell elements, where only the overall shape of the extrusion was modelled. The second was also three-dimensional, but made with three-dimensional brick elements. This model represented the extrusion in nearly its entirety, including the tongue and groove connections. The design code calculations were found to be conservative. The shell models were effective at determining the peak load when the failure mode was tension flange rupture and the brick models were effective in predicting the peak load when tongue and groove connection failure governed the capacity. The clamp tests were compared to mechanics-based, design calculations and an FE model with brick elements, which were based on several design considerations including torque-wrenching for tightening bolts and an assumed friction coefficient. The peak loads from testing were all higher than the calculated and FE model results. Thermal expansion is particularly important to the design of a bridge with GuarDeck® or a similar deck product because the aluminum deck will expand approximately twice as much as the steel girders. Generally, the deck will either need to resist the forces caused by restricted thermal expansion or the DG connections must allow the change in geometry but resist other forces such as vehicle braking. An analytical parametric study was conducted to determine how geometry, temperature, and vehicle braking affect the DG reactions using a linear-elastic FE model of a steel girder with an aluminum plate, representing the deck, connected using linear spring elements. The goal was to develop a means to determine DG reactions as a function of the linear connection stiffness and the various parameters mentioned using empirical equations. The results of the preliminary study showed that geometric changes to the bridge cross-section have a non-linear influence on the DG reactions. In contrast, the effect of changing the temperature parameters is linear and changing the value of the temperature gradient have practically no effect. The braking force results in the highest DG reaction when the vehicle is entering the bridge.