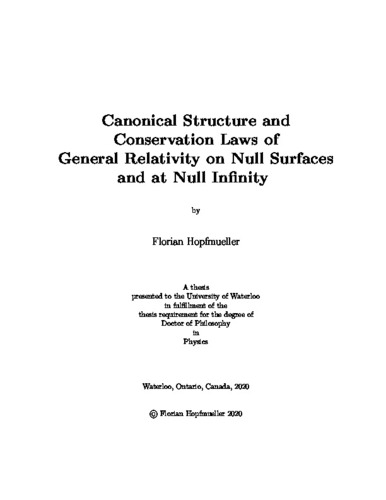 The first part of this thesis addresses the canonical structure of general relativity on generic null surfaces. The pre-symplectic potential of metric general relativity, evaluated on a null surface, is decomposed into variables describing the intrinsic and extrinsic geometry of the null surface, without fixing the gauge. Canonical pairs on the null surface and its boundary are identified and interpreted. Boundary contributions to the action corresponding to Dirichlet boundary conditions are identified. The constraints on a null surface are written in the same variables, and naturally take the form of conservation laws mirroring those at null infinity, equating the divergence of a relativistic current intrinsic to the null surface to a flux which has a canonical form. The conservation laws are interpreted canonically and related to Noether’s theorem. The second part of this thesis addresses the problem that in asymptotically simple spacetimes, such as asymptotically flat spacetimes, the pre-symplectic potential of field theories on constant-radius surfaces generically diverges in the radius. A scheme is introduced for electromagnetism and gravity which, on-shell, for any spacetime dimension, allows one to absorb the divergences into counterterms, which correspond to the ambiguities of the pre-symplectic potential. The counterterms are local including in the radius, and render also the action and the pre-symplectic potential on constant-time surfaces finite. The scheme employs Penrose’s conformal compactification of spacetime. The scheme is introduced and explored for electromagnetism in D ≥ 5 dimensions. The equations of motion are analyzed in an asymptotic expansion for asymptotically flat spacetimes, and the free data and dependencies among the data entering the symplectic potential are identified. The gauge generators are identified, and are rendered independent of subleading orders of the gauge parameter by introducing further local, finite counterterms. The generators and their fluxes coincide with expressions derived from soft theorems of quantum electrodynamics in even dimensions. Finally, the renormalization scheme is developed for general relativity in asymptotically simple spacetimes, where it applies in D ≥ 3 dimensions and for any cosmological constant, and does not require any boundary or gauge conditions beyond asymptotic simplicity and some degree of regularity. The resulting expression for the pre-symplectic potential is specialized to a relaxation of the Bondi gauge conditions for four-dimensional asymptotically flat spacetimes, and an existing result is recovered. The scheme is compared to holographic renormalization in four and five spacetime dimensions, and the renormalized stress-energy tensors on asymptotically AdS space are recovered up to scheme-dependent terms. The canonical generators of diffeomorphisms under the renormalized symplectic form are computed.