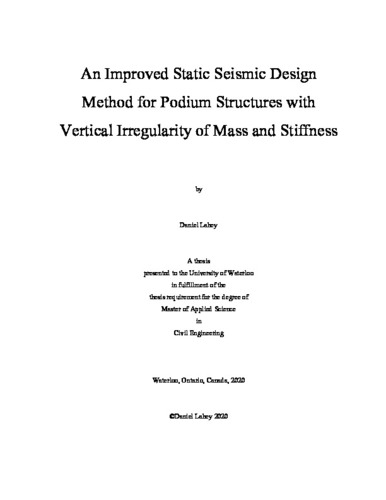 Owing to potentially reduced costs and faster project timelines, North American designers are increasingly opting for novel structural systems that are not well-addressed by the current model codes. Specifically, mid-rise structures are increasingly incorporating a vertical combination of seismic force-resisting systems, in which a stiff and massive lower podium structure (e.g. a reinforced concrete moment resisting frame) is used to support a less massive, less stiff upper tower structure (e.g. of cold-formed steel). These structures are vertically irregular in both their mass and stiffness and thus subject to restrictions and complications if designed according to modern design codes. In particular, the design procedure is generally both dynamic and iterative, not static and closed-form. These restrictions are imposed based on the justifiable expectation that such a vertically irregular structure behaves differently than a regular one. Research has repeatedly demonstrated that such structures exhibit more severe higher-mode effects, differences in inelastic action and a response that is sensitive to the relative stiffness and mass of the two structures. To remedy this, previous studies by Yuan & Xu (Xu & Yuan, 2015; Yuan, 2016; Yuan & Xu, 2016, 2014) propose a methodology to assess the feasible storey-stiffness distributions and equivalent static loads appropriate to such as structure, both for NBCC 2010 (National Research Council of Canada (NRCC), 2010). and ASCE 7-10 (American Society of Civil Engineers (ASCE), 2010). Based on the work of Yuan & Xu, the current study aims to both improve the ease of use and the scope of these methods. This includes extending them to NBCC 2015 (NRCC, 2015c), larger mass ratios and storey counts. The first half of the current study concerns the feasible storey-stiffness distributions, as first proposed by Yuan & Xu (Xu & Yuan, 2015; Yuan, 2016; Yuan & Xu, 2014). By approximating the expected magnification of the upper structure’s first mode shear as a function of the mass and stiffness ratios between the two structures and by applying the code-specified limitation on interstorey drift to the upper structure, the procedure relates the degree of irregularity in a given structure to the required stiffness of the upper structure. the stiffnesses of the upper and lower structures are confined to those ranges for which the interstorey drift is tolerable for the expected amplification. In other words, the relationship between the higher-mode and first-mode base shears for the upper structure is used to characterize the feasible stiffness distribution subject to all other variables being known a priori. Compared to Yuan (2016), the critical points that define the relationship between the overall stiffness ratio and the amplification ratio are redefined and simplified, and the approximation to the NBCC spectral relationship is abandoned in favour of a direct numerical or graphical solution. Two examples demonstrate the proposed procedure, with the second also comparing the results to Yuan (2016). The latter half of the current study concerns the estimation of equivalent static loads on a mid-rise structure with a vertical combination of framing systems. Neither ASCE 7 nor NBCC 2015 incorporate irregularity into their static procedures –they consider the default procedure applicable to irregular structures subject to period and/or height requirements, except for cases where the lower structure is much stiffer than the upper one. If this is the case, the ASCE 7 two-stage procedure may be used. The procedure allows that each structure can be analyzed separately via the static procedure and reassembled to obtain the full structural loads. Unfortunately, Yuan & Xu (Yuan, 2016; Yuan & Xu, 2016) and others note that both the two-stage procedure and default static procedures do not well-represent the load distribution on an irregular structure. Instead, the current study proposes two approaches. The first is applicable only for a one-storey upper structure (appendage) and is based on Yuan (2016). In this method, the proposed higher-mode amplification factor is used to characterize the increased loads applied to the top storey, and the lower structure is analyzed as though regular per the NBCC. Despite the removal of the requirement on the stiffness ratio imposed by Yuan (2016), the revised method performs well with the redefined amplification factor. Meanwhile, the second method is wholly new and more generally applicable than the two-stage procedure proposed by Yuan (2016). By extending the amplification factor concept to the top storey and modifying the assumed force distribution accordingly, the proposed method conservatively estimates the loads on even fairly irregular structures. Altogether, the proposed changes to both the stiffness procedure and the calculation of the equivalent static loads represent a marked improvement to the methods proposed by Yuan (2016). Despite an expanded domain and applicability and an updated acceleration spectrum, the proposed procedures are both easier to use and more widely applicable than the previous iteration.