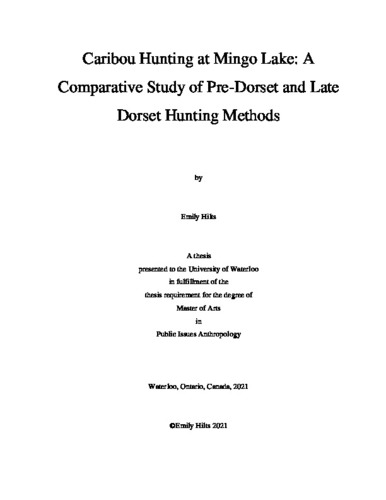 Caribou are a very important resource in the Arctic because they provide food, raw material for weapons and tools and skins for warm winter clothing. The methods used to hunt these animals have been studied extensively by ethnographers who lived with and observed Inuit groups during the late 19th and early 20th century. At that time, hunting methods were changing due to the fur trade and the introduction of rifles but there were still groups who used older methods of hunting that would have been similar to techniques used by ancient arctic peoples. LdFa-1 is a multi-component caribou-hunting site on the northwestern corner of Mingo Lake, Southern Baffin Island, Nunavut that was used by the Pre-Dorset, Dorset, Thule, and Inuit. The focus of this paper is the distinct Pre-Dorset and Late Dorset occupations. The Pre-Dorset lived from around 4,500 B.P. to 2,700 B.P. before developing into the technologically different Dorset culture, who survived until sometime before 700 B.P. before disappearing for reasons that are still unclear to archaeologists. The Pre-Dorset and the Late Dorset both hunted caribou at Mingo Lake but the only surviving evidence for the methods they used are in the form of a few stone endblades and harpoon heads. Due to this limited archaeological evidence, a study that combines ethnographic accounts with the archaeological data has the potential to determine which techniques for hunting caribou at Mingo Lake would have been possible by each culture with the technology it possessed.