Modelling and Navigation of Autonomous Vehicles on Roundabouts 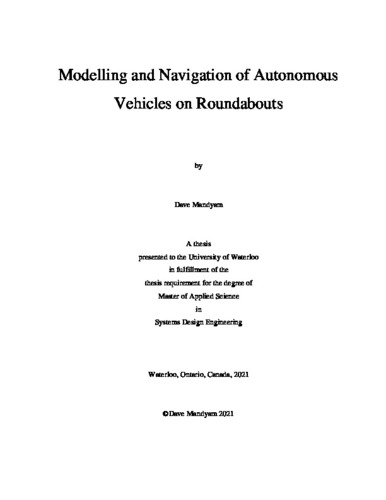 A path following controller was proposed that allows autonomous vehicles to safely navigate roundabouts. The controller consisted of a vector field algorithm that generated velocity commands to direct a vehicle. These velocity commands were fulfilled by an actuator controller that converts the velocity commands into wheel torques and steering angles that physically move a vehicle. This conversion is accomplished using an online optimization process that relies on an internal vehicle model to solve for necessary wheel torques and steering angles. To test the controller’s performance, a 16 degree of freedom vehicle dynamic model was developed with consideration for vehicle turn physics. Firstly, tire force data was gathered by performing driving maneuvers on a test track using a vehicle fitted with tire measurement equipment. The generated tire force data was used to compare various combined slip tire force models for their accuracy. The most accurate model was added to the high-fidelity vehicle model. Next, suspension kinematic data was generated using a simple testing procedure. The vehicle was equipped with the tire measurement equipment and the vehicle was raised a lowered with a hydraulic jack. Using displacement and orientation data from this test, a novel reduced order suspension kinematic model that reproduces the observed motion profile was developed. Application of the path following controller to the high-fidelity model resulted in close following of a roundabout path with small deviations.