Design of a Remote, Integrated, Automatic and Continuous Bedload Sediment Transport Monitoring Station and Application in a Rural Stream in Southern Ontario 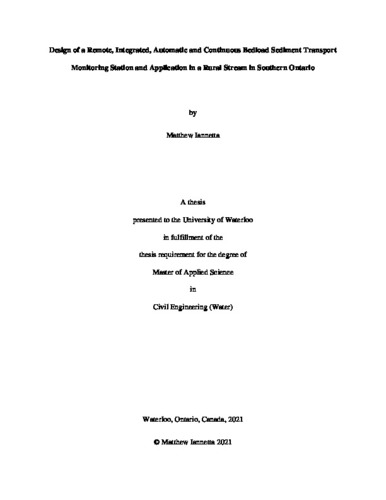 The form and function of a stream network is directly influenced by natural processes and human activities that occur within the watershed. Human modifications in the form of urban and agricultural development alter natural water and nutrient cycles, which adversely affects stream health and stability. As new stormwater management techniques that aim to mitigate these impacts become more commonly implemented, it is prudent to investigate if we can continue modifying the landscape and alternatively realize a net benefit to stream health and stability. To evaluate the effectiveness of stream restoration efforts, baseline flow and bedload sediment transport characteristics should be characterized. However, many commonly used bedload monitoring methods often yield limited inter-flood or discontinuous data, which restricts our understanding of bedload transport dynamics. Field efforts involved in collecting these data can be difficult, expensive, and dangerous in some circumstances of significant flow. This thesis presents a new remote, integrated, automatic and continuous bedload monitoring station. The station configuration is relatively inexpensive, easy to deploy in the field, and designed for remote applications. The station was deployed at a semi-alluvial headwater creek located in an agricultural watershed in Southern Ontario where baseline flow and bedload sediment transport characteristics were studied. The station integrates two indirect monitoring devices including an in-situ radio frequency identification (RFID) antenna tracker and “Benson-Type” seismic impact plates. 400 synthetic RFID tracer stones divided into four size classes were seeded upstream of the station to be tracked automatically as they gradually pass over the in-situ RFID antenna. The “Benson-Type” seismic impact plates rest along the creek bed surface and function by converting mechanical energy exerted by mobile bedload particles that strike the plates into electrical energy recorded as total counts. A sediment trap was installed to help calibrate the continuous impact plate data record. Supplemental inter-flood tracer tracking surveys were completed to monitor tracer movement along the study reach. Field observations were used to build a predictive model of bedload sediment transport. The predictive model was used in combination with hydrologic model outputs to make relative comparisons of tracer displacement under alternative land-use scenarios. The field study was limited by technical shortcomings that ultimately prevented consistent operation of the station during the study period and uncertainty in impact plate device performance limited the usefulness of the recorded dataset. Technical improvements were gradually added to the bedload monitoring station throughout the study period and additional planned upgrades should allow for more consistent operation in the future. It is recommended that the impact plates undergo flume experimentation in a future study to clarify uncertainties related to device performance.