Evaluating the Effectiveness of Cities Working With Ridesourcing Companies 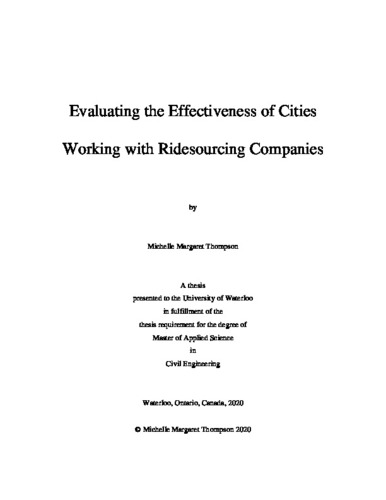 The process of using an application or web-based platform to hire a person with their personal vehicle to transport someone to their destination is also known as ridesourcing; and this is a new form of transportation that has risen quickly in the last decade. As an alternative to driving alone or taking transit, ridesourcing services have the ability to compete with public transit, increase congestion during peak periods, and challenge existing regulations and practices, leading to constant debates in the passenger transportation industry. Most of these debates have been caused by a lack of information on the full spectrum of the interactions that ridesourcing services may have with the existing mobility forms and the impacts that could result from these services and interactions. Therefore, there exists an urgent need for a comprehensive analysis on the potential mobility and environmental impacts of ridesourcing services. A survey is first conducted to understand the current relationship that ridesourcing companies have with the cities that they operate in. The results from this survey show that majority of the transit agencies in Canada do not have much of a relationship at all with ridesourcing companies and are unwilling to start one. However, those that do try and create a relationship with ridesourcing companies, end up with positive outcomes, such as filling in the gaps in their public transit, which in turn increases ridership. The case studies of this thesis look at some of the partnerships and relationships that have been formed by transit agencies / municipalities and ridesourcing companies. It is found that there are numerous ways a partnership can be formed whether in a large or small way. These case studies also demonstrated that the majority of rideshare or ridesourcing companies are open to a partnership and they want to have a fruitful relationship with the cities in which they operate. It turns out that the best thing that cities and transit agencies can do when it comes to ridesourcing companies is to create a partnership and foster a positive relationship. Lastly, an analytical model is proposed to investigate the viability of ridesourcing as a sustainable alternative to traditional transit service as related to various factors such as the size of the service and population density. A base case scenario was considered and examined based on the three pillars of sustainability, which are environment, economics, and society. It was found that a critical population density or demand level exists for any service area: traditional fixed route public transit is more sustainable when the population density is higher than this critical value otherwise ridesourcing services are more sustainable.