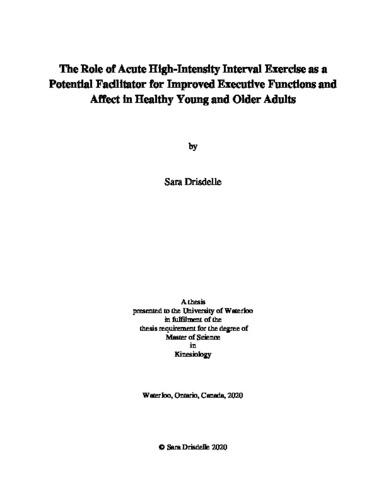 A single bout of aerobic exercise has been shown to improve executive functions and affect across the lifespan. The magnitude of improvements appear to be influenced by exercise-dependent factors, including the intensity and type of the exercise protocol. Recent studies have proposed that high-intensity exercise may elicit cognitive and mood improvements to a degree similar or greater than that of lighter intensities, especially when performed in an interval format. High-intensity interval exercise (HIIE) is a safe and time-efficient workout that may be an effective alternative to traditional endurance exercise. However, the influence of HIIE on executive functions and affect across age groups remains largely unknown. This study examined the effects of an acute bout of HIIE on two areas of executive function (inhibition and working memory) and affect among young and older adults. A total of eight young adults and seven older adults completed the study. Using a repeated-measures design, participants completed three sessions: 1) baseline session: to determine fitness level and target heart rate (HR) for the HIIE intervention; 2) exercise session: HIIE intervention consisting of 10 x 1 min @ 80% heart rate reserve (HRR) interspersed with 1 min @ 40% HRR recovery; 3) control session: low-movement static stretching routine. Order of the experimental sessions (exercise, control) were counterbalanced. Executive functions were assessed immediately before, immediately after and 30-minutes following the cessation of the exercise and control interventions using a computerized Stroop task (inhibition) and a computerized n-back task (working memory). Response time and percent error were calculated from the cognitive task data, to establish a linear integrated speed-accuracy score (RTLISAS). Affect was measured using the Physical Activity Affect Scale (PAAS) immediately prior to and following the completion of the experimental interventions. The four sub-scales of the PAAS (positive affect, negative affect, physical exhaustion and tranquility) were used in analysis. Participants also completed an online survey to identify the primary motivators and barriers for HIIE engagement. Young adults showed a significant improvement in working memory immediately following the HIIE intervention, with improvements maintained into the 30-minute delay period. No significant improvements were observed in the control condition or during the tasks of inhibition. Older adults did not exhibit improvements in working memory or inhibition following the HIIE intervention compared to the control condition. Both young and older adults demonstrated enhanced simple information processing following HIIE, while no changes were observed in the control intervention. Young adults revealed improved exhaustion scores following HIIE and greater overall tranquility during the exercise session. Older adults did not exhibit changes in exhaustion or tranquility scores and no significant changes in negative or positive affect were observed among either group. Finally, young and older adults noted that the strongest motivators for HIIE engagement were physical health benefits, whereas a lack of time to exercise and confidence towards HIIE were the greatest barriers. Results of this study suggest that an acute bout of HIIE may result in improved cognition and affect, but the magnitude of improvements may be dependent on age group and the specific domain of executive function being assessed. Findings should be interpreted with caution due to the small sample size of this study; however, future studies should continue to explore the potential of HIIE as an effective intervention to improve executive functions and affect across age groups, using the results, limitations and suggestions presented in this thesis.