Culture of Female Leadership in a Business Case for Gender Diversity 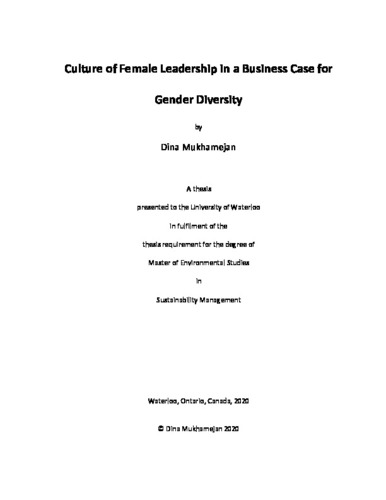 Globally, just under half of the workforce is currently comprised of women, and yet, upper management and executive positions in the corporate world continue to be dominated by men (Terjesen & Sealy, 2016). For example, women hold one-fifth of seats on the boards of directors (BODs) and constitute a quarter of managerial personnel in S&P 500 companies. Research on Australian, Norwegian, and European Union enterprises reports even fewer per cent of women holding CEO (3.3-5%) and chair of a board (3-7%) positions in the span of the past 15 years. A similar picture is observed worldwide. Initiated as a way to end the problem of underrepresentation of women in corporate leadership by proving economic benefit of their human capital, the business case research fails to produce conclusive results. Hoobler et al. (2018) and Mensi-Klarbach (2014) identify a possible root cause of the ambiguity – an absence of a multilevel framework enabling a non- essentialist method for gender effect examination. Thus, this research draws attention to the expectations states theory (EST) and work conducted by Lucas (2006) that bridges the EST and neoinsitutional theory. It suggests that this theoretical program, through a lens of status- based group interactions, provides a holistic view of the role gender plays in leadership team performance. Consequently, it enables a research of gender diversity impact on corporate governance from a non-essentialist point of view and, consequently, it has an advantage over alternative conceptual frameworks applied in business case research. Thus, the purpose of this research was to 1) design a status proxy and 2) run a macro study answering whether status concept has a greater capacity to explain gender effect on corporate governance. Particularly, the work examines gender-based status interference with information exchange, healthy competitive environment and power dynamics in comparison with upper echelons, critical mass, and social identity theories’ concepts of cognitive maps, women numerical representation, and identity-based group splits respectively. Thus, this research designs a status proxy, gender-neutral leadership index (GNL), based on Lucas’ (2006) work. Then, it overviews the critical mass (CMT), upper-echelon (UET), social identity (SIT), and associated with SIT categorization-elaboration model (CEM) and faultlines theories (FT). The study specifically focuses their propositions of gender influence on information exchange and processing, power distribution, and conflicts in leadership teams. It also highlights the CMT, UET, and SIT’s theoretical limitations to conduct a business case from non-essentialist perspective. Further, this research hypothesizes how the GNL explains gender agency in boards of directors relations via the aforementioned principles and designs a study examining the explanatory power of the EST. The results support a relation between the esteem of female leaders and firm performance, implying that cognitive capacities of a team improve as a gap between men and women’s statuses diminishes. The data analysis also indicates that the informal status of women leaders influences power distribution among team members and the degree of team cohesion, unlike the critical mass and faultlines strength concepts. Overall, this study provides evidence in favour of status equality to facilitate a company’s success. Thus, new policies should be developed with consideration of female leadership norms, whereby the GNL index can be applied as a reference. Future research can improve the GNL index accuracy as this measurement was first introduced in this work. For instance, this study designed the index assuming equal strength of the relation between the GNL and its constituencies. Thus, the tool would benefit from qualitative research by conducting an in-depth examination of social institutes and their weight in shaping the culture of gender-neutral leadership. Future research could also address the limitations of this study.