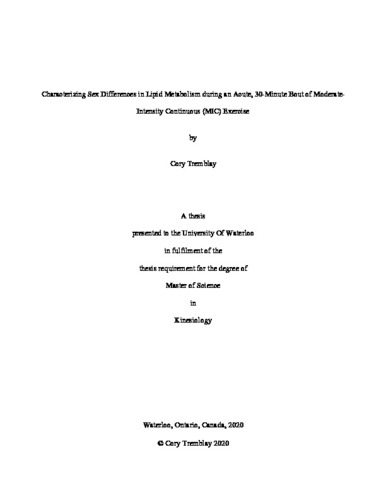 INTRODUCTION: Increased intramyocellular lipid (IMCL) size and storage in the subsarcolemmal region of the myocyte are associated with insulin resistance (IR) and the development of type 2 diabetes (T2D). Women have a higher IMCL content than men yet are at a lower risk for T2D due, at least in part, to the fact that they store IMCL as smaller, more numerous droplets than men. Differences in IMCL turnover may also contribute to the decreased T2D risk. Women utilize a greater proportion of lipids as a fuel source during exercise when compared with men, as evidenced by a lower respiratory exchange ratio (RER). However, whether women rely to a greater extent on IMCL during exercise is equivocal with studies showing greater, similar, or lesser IMCL utilization by women during exercise. IMCL utilization during exercise has been shown to be related to basal IMCL content, which would suggest that women would rely to a greater extent on IMCL during the exercise bout given their increased IMCL storage. Some of the conflicting findings may be due to the fact that the sex-comparative studies conducted to date have focused solely on total IMCL utilization and have not examined whether sex influences region-specific IMCL storage or utilization during endurance exercise. PURPOSE: The aim of this study was to characterize the sex-based differences in substrate utilization, lipid species profile, and enzymes and proteins related to IMCL, lipid and oxidative metabolism following an acute bout of moderate-intensity continuous (MIC) exercise. METHODS: Young, healthy, recreationally active men (n = 12) and women (n = 13) underwent an acute bout of MIC exercise on a stationary cycle ergometer. The MIC exercise session consisted of one, 30-minute cycling bout at 65% VO2 peak with 5-minute breath collections taken at rest, 12, and 25 minutes of exercise. Muscle biopsies were taken from the vastus lateralis muscle prior to and immediately following the exercise bout. All participants were matched for VO2 peak relative to fat-free mass (FFM) to ensure that they were equally trained. As estrogen is known to influence fuel utilization during exercise, women were tested in the midfollicular phase of their menstrual cycle (days 4-9). Enzyme activity assays were used to investigate the activity of β-oxidation and tricarboxylic acid cycle (TCA) enzymes, which included β-HAD and CS, respectively. An untargeted macrolipidomics approach was used to determine sex differences in estimates of fatty acid (FA) content of specific lipid species prior to and following endurance exercise using liquid-chromatography tandem mass spectrometry (LC-MS/MS). Western blot analysis was used to determine the content of proteins involved in lipolysis (ATGL, PLIN3), lipid oxidation (β-HAD, CPT1), and oxidative metabolism (CS, COX II-V). RESULTS: Sex had no effect on RER (p = 0.19), HR (p = 0.44), blood lactate (p = 0.30), or RPE (p = 0.48) throughout exercise. Men oxidized a significantly greater proportion of carbohydrates during the exercise bout (p < 0.001), however whole-body lipid utilization was similar between the sexes (p = 0.92). Protein content for ATGL (p = 0.51), β-HAD (p = 0.80), COX II (p = 0.08), COX III (p = 0.13), COX IV (p = 0.17), COX V (p = 0.94), CPT1 (p = 0.25), CS (p = 0.70), and PLIN3 (p = 0.25) were all similar between men and women. No significant differences in β-HAD (p = 0.54) or CS (p = 0.56) enzyme activity were found; however, relative to baseline, CS activity increased to a greater extent in women (p = 0.04) during exercise. Sex had no effect on detected PC (p ≥ 0.32) or PE (p ≥ 0.23) species. Total abundance of detected TAG content was higher in women than men (p = 0.018), and women had a greater proportion of unsaturated TAGs than men (p = 0.017). Exercise did not influence the lipid profile of PC, PE or TAG species. CONCLUSION: During a 30-minute bout of MIC exercise, whole-body lipid oxidation did not differ between men and women. Furthermore, there was no sex difference in the content of enzymes involved in lipid and oxidative metabolism at rest; however, during the acute bout of MIC exercise CS activity increased to a greater extent in women than men, indicative of a greater increase in oxidative metabolism. Our novel lipidomics analysis provided exciting new insight into the lipid species profiles of PC, PE and TAGs within human skeletal muscle and provides the first report of sex differences in the global lipidome, and serves as the foundation for future studies to complete subsequent lipidomics analyses in human populations.