Threads of Memory: A Culture of Commemoration in Kenya Colony, 1918-1930 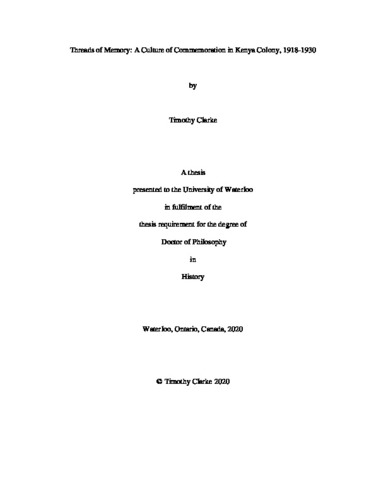 The centenary of the First World War (2014-2018) proffered new interpretations of the conflict as a global war that stretched far beyond the Western Front. Historians of the Great War, however, have continued to characterize the African theatres of the war as ‘sideshows.’ Similarly, Africa has been largely absent from studies of the commemoration and memory of the First World War. While memory studies have contributed to an understanding of the long-term legacy of the conflagration for contemporary nation-states, Africa remains a regrettable exclusion. This study addresses a particular case study – Kenya Colony – as a locus of memory and meaning-making in the wake of the Great War. I argue that Imperial organizations, colonial administrators, and settlers all fashioned the First World War as a validation of the colonial project in East Africa, and the trajectory of the British Empire more generally. In the process, settlers, administrators, and the Imperial War Graves Commission pulled on Empire-wide threads of First World War memory, creating knots of memory that denied Kenyans a meaningful place in the public commemoration of the conflagration. Through their commemorative infrastructure, white settlers in Kenya Colony bolstered their political and social power by referencing the First World War. The memory of the First World War, however, was not homogenous within Kenya’s white community. The culture of commemoration that emerged during the 1920s in Kenya was multifaceted and politically charged. What resulted was a debate on the nature of colonialism in East Africa, where different interest groups posited different interpretations of 1914-1918. Ultimately, even though at least 45,000 Kenyans died in the First World War, on the eve of decolonization the First World War was no longer nationally significant in Kenya, relegating its history to the background of Kenyan politics and history.