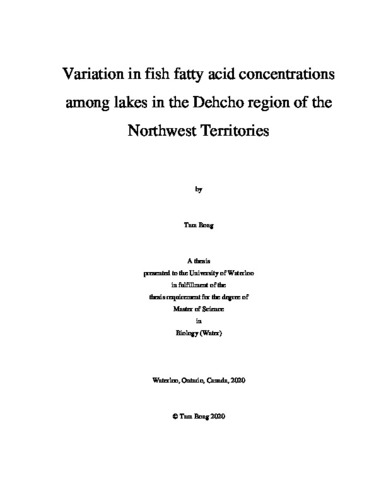 Background: In the subarctic Dehcho region of the Northwest Territories, many remote communities rely on traditional foods, including fish, to supplement more expensive store-bought options. Fish are an excellent source of omega-3 and omega-6 polyunsaturated fatty acids (n-3 and n-6 PUFAs, respectively), essential compounds that can only be obtained through the diet. Long-chain n-3 PUFAs, such as eicosapentaenoic acid (EPA) and docosahexaenoic acid (DHA), are especially important for human health. As the health benefits derived from consuming fish can be diminished by the risk imposed by exposure to contaminants, such as mercury, researchers and communities in the Dehcho region began a collaborative project in 2012 to quantify both fatty acid and mercury concentrations in fish. In the course of this work, it was found that concentrations of fatty acids in fish differed significantly among lakes in the Dehcho region. In freshwater ecosystems, fatty acids are produced by algae and bacteria and transferred up the food chain through consumption. The type and quality of fatty acids produced varies among primary producer taxa, meaning that fatty acid profiles in fish may vary among lakes due to variation in the composition of algal and bacterial communities, which in turn vary in response to abiotic conditions in lakes. Objectives: As some fish samples were stored for multiple years before processing, the first objective of this study was to determine if there was a relationship between concentrations of fatty acids and storage time at -20 degrees C. After determining which fatty acids were affected by storage time and how they were affected by storage time, the second objective was to update existing fish fatty acid profiles (analysed from samples collected 2013-2015) for the study lakes. The third objective was to determine whether there were differences in concentrations among lakes for several fatty acid groups of interest, including total fatty acids (TFA), n-3 and n-6 PUFAs, DHA, and EPA, and whether observed differences in fish fatty acid profiles could be explained by water chemistry and/or watershed characteristics among lakes. Methods: A total of 433 fish, including Burbot (Lota lota), Cisco (Coregonus artedi), Lake Trout (Salvelinus namaycush), Longnose Sucker (Catastomus catastomus), Lake Whitefish (Coregonus clupeaformis), Northern Pike (Esox lucius), Walleye (Sander vitreus), and White Sucker (Catastomus commersoni) were captured in 10 important subsistence lakes within the Dehcho region between the years of 2013 and 2018. Sampled lakes were located in three different eco-zones, the Hay River Lowlands, the Horn Plateau, and the Northern Alberta Uplands. Fish muscle tissue was frozen on-site and transported back to the University of Waterloo for laboratory analysis of both fatty acid and mercury concentrations. Water samples were collected at each lake to characterise lake chemistry (e.g. major nutrients, ions, dissolved organic carbon, etc.), and these data were compared to an existing dataset on watershed characteristics (e.g. lake area, watershed area, etc.). Results: In every fish species, DHA concentrations decreased exponentially with increasing storage time, while C:24:0, a saturated fatty acid, increased significantly with increasing storage time. Updated fish fatty acid profiles and mercury concentrations confirmed results found by Reyes et al (2017) and Laird et al (2018); Cisco, Lake Whitefish, Longnose Sucker, and White Sucker are the fish species with the highest fatty acid concentrations and lowest mercury concentrations. Concentrations of all fatty acid groups examined in Northern Pike were statistically different among lakes (TFA, n-3 and n-6 PUFAs, EPA, and DHA), while only some fatty acid groups in Lake Whitefish (TFA, n-6 PUFAs, and DHA) and Walleye (n-3 and n-6 PUFAs) varied significantly among lakes. Significant predictors of concentrations of fish fatty acids included both water chemistry and watershed characteristics, and fell into 3 distinct groups of variables: lake productivity (total phosphorus), indicators of carbon quality (UV254, specific UV absorbance, dissolved organic carbon, and total nitrogen), and catchment influence (chloride concentrations, calcium concentrations, and the ratio of lake perimeter to watershed area). Understanding factors that lead to variation in concentrations of fish fatty acids, both among lakes and because of storage practices, can inform predictions of the nutritional value of fish in other lakes, provide a baseline for assessing ongoing effects of climate-induced change, and allow community members to make informed choices about the fish that they are eating.

Tara Boag (2020). Variation in fish fatty acid concentrations among lakes in the Dehcho region of the Northwest Territories. UWSpace. http://hdl.handle.net/10012/16594