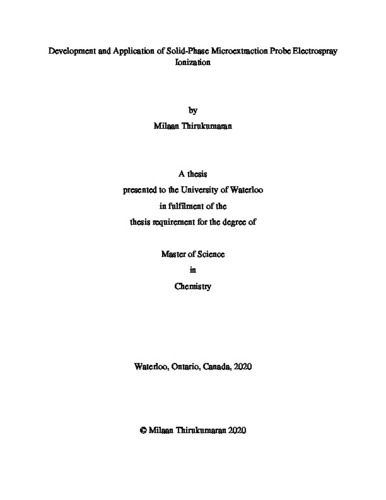 Ambient ionization mass spectrometry (AIMS) is a category of mass spectrometry (MS) techniques originally characterized as using ambient ionization sources to analyze samples with little to no sample preparation and no chromatography step. This set of techniques have quickly gained popularity due to fast workflows and the ability to perform high throughput analysis. However, AIMS is prone to high matrix effects and reduced sensitivities. Solid-phase microextraction (SPME) is commonly used to mitigate these effects due to easy integration into pre-existing AIMS workflows, enabling preconcentration and extraction. Probe electrospray ionization (PESI) is a technique developed by Hiraoka and colleagues in 2007, then commercialized by Shimadzu Corporation years later. In PESI a small metal probe is dipped into the sample and immediately moved upwards, close to the inlet of a mass spectrometer to facilitate electrospray ionization (ESI). In recent years there has been a shift from using PESI for qualitative studies towards quantitative studies. With this shift in intentions, sample preparation has been incorporated into PESI workflows. The objective of this work is to incorporate SPME as a sample preparation method for PESI and develop applications for this technique. The first objective was to see if the PESI probes could be coated and to see if SPME-PESI-MS/MS could give reliable MS data. To ensure reproducibility of such small probes, intra- and inter-probe reproducibility tests by liquid chromatography coupled to tandem mass spectrometry (LC-MS/MS) were conducted using drugs of abuse. These results show reproducibility of the probes with almost all relative standard deviations being ≤ 15%. Afterward, the optimal desorption solution for SPME-PESI-MS/MS was determined. It was also found that a coated PESI probe used for SPME-PESI-MS/MS could not be used for a subsequent LC-MS/MS run without extracting the sample again due to significant desorption by SPME-PESI-MS/MS. Furthermore, an application of SPME-PESI-MS/MS to quantitate drugs of abuse from 30µL of plasma was developed. The intra-day precision of said method was under 15% for all compounds. The inter-day precision of all compounds was under 15% except for lorazepam at the 30 ng mL-1 validation point and oxazepam at the 90 ng mL-1 validation point. The accuracy of all compounds for this method was within 80-120% except for lorazepam at the 30 ng mL-1 validation point. The small dimensions of the coated PESI probes were then leveraged to determine the free concentration and plasma protein binding of diazepam from human plasma by SPME-PESI-MS/MS. The plasma protein binding determined by SPME-PESI-MS/MS was 99.3% which falls within literature values of 97-99% from human plasma samples spiked with 25 ng mL-1 of diazepam. Finally, the development of a screening method for aminoglycosides was explored with SPME-PESI-MS/MS. This was to explore the use of AIMS technologies as an alternative screening method for compounds that require conditions that are highly detrimental to MS systems (i.e. high salt concentrations or ion-pairing reagents).