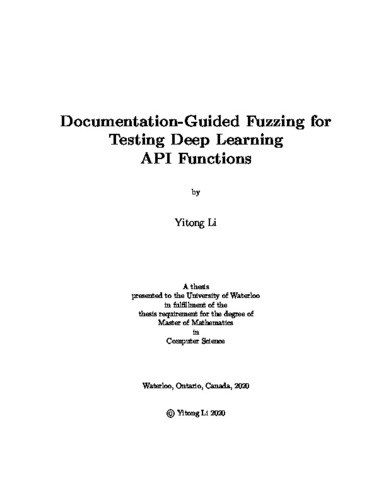 Widely-used deep learning (DL) libraries demand reliability. Thus, it is integral to test DL libraries’ API functions. Despite the effectiveness of fuzz testing, there are few techniques that are specialized in fuzzing API functions of DL libraries. To fill this gap, we design and implement a fuzzing technique called DocTer for API functions of DL libraries. Fuzzing DL API functions is challenging because many API functions expect structured inputs that follow DL-specific constraints. If a fuzzer is (1) unaware of these constraints or (2) incapable of using these constraints to fuzz, it is practically impossible to generate valid inputs, i.e., inputs that follow these DL-specific constraints, to explore deep to test the core functionality of API functions. DocTer extracts DL-specific constraints from API documents and uses these constraints to guide the fuzzing to generate valid inputs automatically. DocTer also generates inputs that violate these constraints to test the input validity checking code. To reduce manual effort, DocTer applies a sequential pattern mining technique on API documents to help DocTer users create rules to extract constraints from API documents automatically. Our evaluation on three popular DL libraries (TensorFlow, PyTorch, and MXNet) shows that DocTer’s accuracy in extracting input constraints is 82.2-90.5%. DocTer detects 46 bugs, while a baseline fuzzer without input constraints detects only 19 bugs. Most (33) of the 46 bugs are previously unknown, 26 of which have been fixed or confirmed by developers after we report them. In addition, DocTer detects 37 inconsistencies within documents, including 25 fixed or confirmed after we report them.