On the Relationships Between Mind-Wandering, ADHD, Engagingness, and Effort 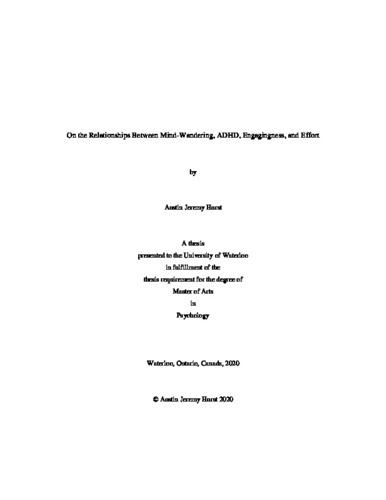 Existing research on mind-wandering (MW) has found that adults with attention-deficit hyperactivity disorder (ADHD) experience it more frequently and find it more disruptive to their daily lives than individuals without the disorder (Franklin et al., 2017). However, little research has been done on the academic costs of frequent and disruptive MW associated with ADHD. In addition, past theoretical work has made a distinction between intentional and unintentional MW (Grodsky & Giambra, 1990; Seli, Risko, Smilek, & Schacter, 2016), but has not examined how effort to stay on-task informs this distinction. To address these distinct lines of research, we conducted an omnibus study to examine how ADHD symptomatology related to MW while reading engaging and unengaging textbook content (Experiment 1A), as well as how reports of intentional and unintentional MW related to reported effort to stay on-task (Experiment 1B). For Experiment 1A, we found that ADHD symptomatology predicted higher rates of inattention for unengaging texts, and that this effect was stronger for unengaging texts that were read second. However, we found no evidence for an effect of ADHD symptomatology on reading comprehension. For Experiment 1B, we found that reports of intentional MW were associated with moderate effort to remain on-task, contradicting existing theory and suggesting alternative distinctions may be more theoretically and practically useful. Together, both lines of research broaden our understanding of the practical consequences and theoretical nuances of mind-wandering.