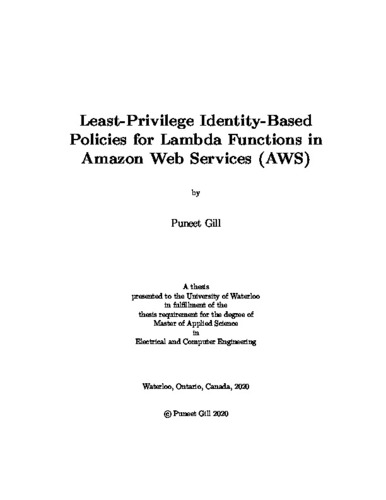 We address least-privilege in a particular context of public cloud computing: identity-based policies for callback functions, called Lambda functions, in serverless applications of the Amazon Web Services (AWS) cloud provider. We argue that this is an important context in which to consider the fundamental security design principle of least-privilege, which states that every thread of execution should possess only those privileges it needs. We observe that poor documentation from AWS makes the task of devising least-privilege policies difficult for developers of such applications. We then describe our experimental approach to discovering least-privilege for a method call, and our observations, some of which are alarming, from running it against 171 methods across five different AWS services. We discuss also our assessment of two repositories, and two full-fledged serverless applications, all of which are publicly available, for least-privilege, and find that the vast majority of policies are over-privileged. We conclude with a few recommendations for developers of Lambda functions in AWS. Our work suggests that much work is needed, both from developers and providers, in securing cloud applications from the standpoint of least-privilege.