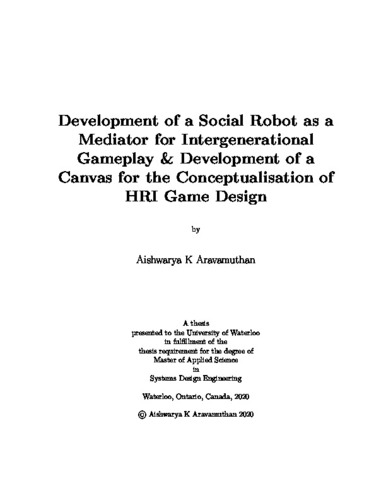 Intergenerational interaction between grandparents and grandchildren benefits both generations. The use of a social robot in mediating this interaction is a relatively unexplored area of research. Often Human-Robot Interaction (HRI) research uses the robot as a point of focus; this thesis puts the focus on the interaction between the generations, using a multi-stage study with a robot mediating the interaction in dyads of grandparents and grandchildren. The research questions guiding this thesis are: 1) How might a robot-mediated game be used to foster intergenerational gameplay? 2) What template can be created to conceptually describe HRI game systems? To answer the first question, the study design includes three stages: 1. Human mediator Stage (exploratory); 2. The Wizard-of-Oz (WoZ) Stage (where a researcher remotely controls the robot); 3. Fully/semi-autonomous Stage. A Tangram puzzle game was used to create an enjoyable, collaborative experience. Stage 1 of the study was conducted with four dyads of grandparents (52-74 years of age) and their grandchildren (7-9 years of age). The purpose of Stage 1 was to determine the following: 1. How do dyads of grandparent-grandchild perceive their collaboration in the Tangram game? 2. What role do the dyads envision for a social robot in the game? Results showed the dyads perceived high collaboration in the Tangram game, and saw the role of the robot as helping them by providing clues in the gameplay. The research team felt the game, in conjunction with the proposed setup, worked well for supporting collaboration and decided to use the same game with a similar setup for the next two stages. Although the design and development of the next stage were ready, the COVID-19 pandemic led to the suspension of in-person research. The second part of this thesis research focused on creating the Human-Robot Interaction Game Canvas (HRIGC), a novel way to conceptually model HRI game systems. A literature search of systematic ways to capture information, to assist in the design of the multi-stage study, yielded no appropriate tool, and prompted the creation of the HRIGC. The goal of the HRIGC is to help researchers think about, identify, and explore various aspects of designing an HRI game-based system. During the development process, the HRIGC was put through three case studies and two test runs: 1) Test run 1 with three researchers in HRI game design; 2) Test run 2 with four Human-Computer Interaction (HCI) researchers of different backgrounds. The case studies and test runs showed HRIGC to be a promising tool in articulating the key aspects of HRI game design in an intuitive manner. Formal validation of the canvas is necessary to confirm this tool.

Aishwarya K Aravamuthan (2020). Development of a Social Robot as a Mediator for Intergenerational Gameplay & Development of a Canvas for the Conceptualisation of HRI Game Design. UWSpace. http://hdl.handle.net/10012/16585