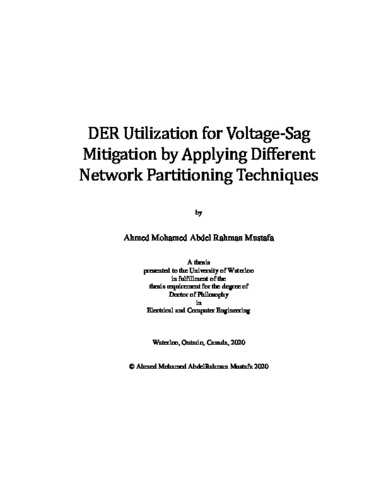 Power quality (PQ) has been gaining increased attention in relation to Active Distribution Systems (ADSs), especially with regard to voltage-related PQ problems (i.e., voltage variation events). Voltage variation events, whether short- or long-term, can cause serious consequences, such as process interruptions, failure of computer-controlled and sensitive equipment, and data loss. One common form of short-term voltage magnitude variations is voltage-sag events, which may be caused by fault conditions, load condition variations, the starting of large motors, or the inrush current of transformers. Voltage-sag events caused by a motor-starting current or a transformer-inrush current are more localized than voltage-sags caused by faults. However, voltage-sag caused by faults propagates in the system such that system-level voltage-sag mitigation is required. Thanks to the high penetration rate of both Renewable Energy Sources (RESs) and Battery Energy Storage Systems (BESSs), an increased number of inverter-based Distributed Energy Resources (DERs) exist in the ADSs. These inverter-based DERs have fast controllability and thus can be utilized to mitigate this type of voltage-sag event while achieving their main objective of supplying energy to the system. Therefore, the active management of RESs and BESSs can swiftly alleviate the voltage-sag problem. Existing DERs in the system can be considered controllable power resources with adjustable active/reactive power signals, so active and reactive power management of inverter-based DREs is proposed in this research for performing system-level voltage-sag mitigation in ADSs. The proposed voltage control framework is based on two parallel and complementing actions. The first is injecting active and reactive powers to restore the system's voltage close to the 0.9 p.u., and the second action involves the identification and isolation of the voltage-sag origin (i.e., faults). This thesis has four main parts that achieve the two actions required in order to mitigate voltage-sags. The first part of the thesis develops a voltage-sag origin identification methodology to identify the fault origin and detect whether the fault is upstream or downstream from the system’s point of common coupling (PCC). This developed technique is assumed to run in the background and is initiated by the voltage-sag event. The technique is fast, efficient, and cost-effective, based on the application of voltage and current estimation techniques in conjunction with Tellegen's theorem for identifying and detecting the exact location of the voltage-sag origin in ADSs. At the same time the developed identification sub-routine is running, a voltage-sag mitigation sub-routine is also running to achieve the first action of the proposed framework. In the second part, a novel system level-based voltage-sag mitigation algorithm is proposed for solving voltage-sag problems in ADSs. The algorithm is based on partitioning the system into virtual mitigation zones to mitigate the voltage-sag as quickly and optimally as possible. Information regarding the voltage-sag origin will help mitigate voltage-sags that could not be overcome via the available DERs’ capacity. Therefore, if the fault is within the system boundary (i.e., downstream from the PCC), the voltage-sag origin should be isolated, which is achieved by the second action running in the background. If the voltage-sag mitigation requirements (i.e., injection of active and reactive powers) are beyond the DERs’ capabilities, parts of the system can face unintentional islanding. To prevent this unintentional islanding, the planning of intentional islanding will isolate the voltage-sag origin from the system and hence improve supply continuity and system reliability. Intentional islanding of this kind can be achieved via partitioning the system into clusters of survivable microgrids. The partitioning approach will not only isolate the faulted zone that caused the voltage-sag event, but will also ensure that the constructed microgrids are survivable in terms of supply adequacy and microgrid stability. In the third part, a framework based on small-signal stability is proposed to construct survivable microgrids according to a stability-constrained partitioning scheme. The partitioning of the system into survivable self-adequate microgrids during prolonged voltage-sag events can isolate the voltage-sag root cause. Thus, by isolating the voltage-sag origin from the rest of the system, voltage-sag mitigation is accomplished. Moreover, this partitioning scheme is valuable to the DSOs and it leads to voltage-sag mitigation without adding any resources to the system. Finally, in the fourth part, a recovery algorithm for post-voltage-sag mitigation is proposed. The recovery algorithm is based on reconnecting the neighbouring microgrids. These microgrids should have the ability to seamlessly reconnect when necessary. To facilitate the implementation of the proposed recovery algorithm, a smooth reconnection method between two microgrids is a key feature that should be adopted by the microgrid control scheme. Moreover, survivable microgrids must be synchronized before reconnection. These synchronization conditions are: same voltage magnitude, same frequency, and same phase angle at the terminal buses of the two microgrids. The effectiveness of the synchronization algorithm is proven by multiple case studies, and the microgrids are successfully returned to synchronization and connected together to form one microgrid.