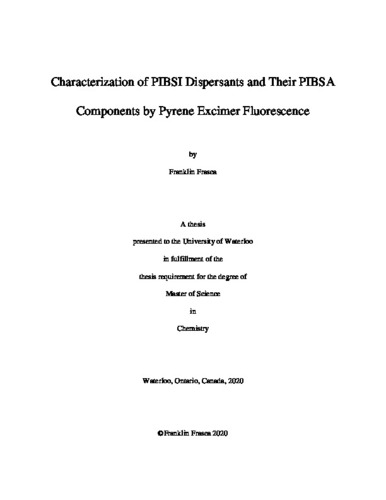 Methods are introduced to characterize the products resulting from the coupling of a polyisobutylene terminated at one end with a succinic anhydride (PIBSA) and a polyamine to generate PIBSI products where the polyamine is flanked by one or two PIB segments via a succinimide bond. The molar fraction of doubly modified PIBSA (PIBSA2) molecules in two PIBSA samples (PIBSA-1 and PIBSA-2) was first determined using pyrene excimer formation (PEF) to analyse both PIBSA samples after labeling fractionated and unfractionated PIBSA samples with 1-pyrenemethylamine (PyMA) to generate PIBSA-PyMA. The ratios of succinic anhydrides, succinimides, or pyrenyl labels to the number of isobutylene units NSA/NIB, NSI/NIB, and NPy/NIB determined by FTIR and UV-Vis spectroscopy established that the succinic content of the unfractionated PIBSA-PyMA samples was roughly double that of the fractionated samples, suggesting a difference in the molecular weight distribution (MWD) of the samples which was confirmed by GPC analysis. Model free analysis (MFA) of the time-resolved fluorescence (TRF) decays yielded the average rate constant of pyrene excimer formation by diffusion (<k>) which increased linearly with [Py], and the molar fraction fagg of PyMA attached on PIBSA2 forming excimer by direct excitation of aggregated pyrene dimers, and in turn the fraction (f¬doubly) of PIBSA2 in each sample. fagg was higher for PIBSA-1 and did not change between the fractionated or unfractionated samples suggesting that PIBSA2 was evenly distributed across the MWD of PIBSA. The number average degree of polymerization (Xn) was calculated for the PIBSA-PyMAs and showed a linear relationship with the rate constant (kdiff) describing PEF by diffusion. Next, it was hypothesized that the composition of the mixture of a coupling reaction between PIBSA and a polyamine could be predicted with the knowledge of the ratio of the number of amines to SA units (NAm/NSA) available for the coupling reaction, the NSA/NIB ratio, and the fraction (fdoubly) of PIBSA2 chains in the PIBSA sample. Two programs were written to simulate the products generated from the coupling of PIBSA with a diamine to form either bis-PIBSI (b-PIBSI) and higher-order PIBSI oligomers, or to only form b-PIBSI assuming that steric hindrance prevented more than one PIBSA from linking to another PIBSA molecule. A set of PIBSA to hexamethylene diamine (HMDA) coupling reactions were conducted with a fractionated PIBSA-2 sample to yield the PIBSA-2-H(X) samples, where X equals the NAm/NSA ratio used in a coupling reaction, and generate DRI traces with GPC for use with the simulated data and the validation of the simulation programs. Parameterization of the DRI traces with sums of Gaussians enabled the determination of the fractions of PIBSA-like molecules (PLMs) and non-PIBSA-like molecules (non-PLMs) and their comparison with the fractions obtained from the simulations. This along with GPC analysis suggested that PIBSA-2 contained 30 wt% of unmaleated PIB. When assuming that the PIBSA coupling reaction could only form b-PIBSI, excellent agreement was found between the experimental and simulated DRI traces supporting the validity of this assumption. Lastly, a study was conducted with a series of pyrene-labeled polyamines (Py-PAs) representative of the core of a PIBSI dispersant, to examine the relationship between the fluorescence intensity ratio of the pyrene excimer over that of the monomer (IE/IM), <k>, and the local pyrene concentration ([Py]loc) in the Py-PAs, and ultimately assess the usefulness of <k> for establishing a <k>-vs-[Py]loc calibration curve to characterize the polyamine core of pyrene-labeled PIBSI dispersants. MFA of the TRF decays acquired with the Py-PAs yielded <k> and the analysis of the fluorescence spectra yielded IE/IM. Both <k> and IE/IM increased linearly with increasing [Py]loc, suggesting that the <k>-vs-[Py]loc plot could be used as a calibration curve for analysis of the polyamines in the PIBSI cores. The methods detailed in this thesis expand on the use of PEF to study PIBSA-coupling procedures introduced in previous work by A. Mathew and S. Pirouz, and have resulted in a variety of interesting findings about the PIBSA samples studied herein such as the content of PIBSA2 in a PIBSA sample and accurate predictions of the PIBSI coupling products taking into account fagg determined by PEF. These experiments further emphasize the usefulness of PEF as a characterization method for macromolecules in general, and oil-additives specifically.