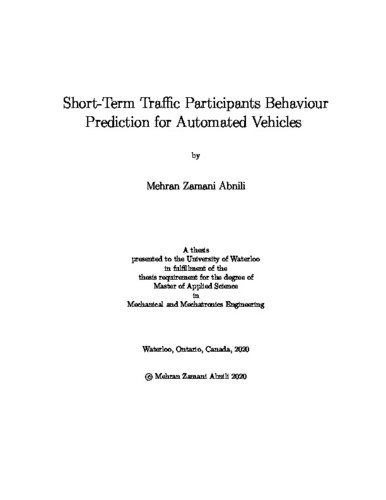 Due to the rapid commencement of autonomous vehicles and the promising potential benefits, it has made it critical for said vehicles to be able to interpret their environment and compensate for the absence of driver predictions from visual cues. This study presents a novel intermediate component to improve the performance of autonomous vehicle controllers, by providing them with real-time microscopic predictions of traffic participants' behaviour, given the environmental conditions. This strategy is especially aimed towards direct combination with model-predictive controllers (MPCs) and other controllers that can utilize dynamic state predictions. This task is undertaken in three stages for three different scenarios. Scenario I considers V2X communications and predicts the velocity of an arbitrary vehicle in longitudinal direction. Using a recurrent neural network (RNN) and considering a complementary variable the strategy can predict the speed profile of said vehicle for arbitrary horizons. Results of this scenario exhibit >0.95 correlation if trained with enough data. Scenario II moves on to a more sophisticated approach for prediction of vehicles on US-101, using real data provided by the U.S. Federal Highway Administration (FHWA) under NGSIM. Utilizing a marriage of dynamic Bayesian network (DBN) and RNN, the method can make predictions on speed profiles of all present vehicles within a range, for arbitrary horizons, as well as prediction on whether the vehicle on the main lanes would yield to the merging vehicles on the ramp. Due to digital nature of the DBN stream, a Kalman filter (KF) was introduced as post processing smoothing method. Results of this scenario exhibit >0.95 correlation and <1.6 mph mean absolute error. Scenario III tackles a much more complex driving environment, intersection driving. Because in intersection driving, the priority relationships of highway driving are no longer existent, the training must be broadened to encompass vehicle pairs which is exponentially more difficult than training for single vehicles. The data for this phase was generated by SUMO. Results of this scenario exhibit <1.1 mph mean absolute error. Scenario IV focuses on the problem of roundabout driving. In roundabout driving, the general driving situation is more similar to highway merging, however due to the rapid move toward replacing intersections with roundabouts, especially in developing cities, definitely an important scenario to look at. In this scenario SUMO was used for data generation, a new DBN topology was developed and the results yielded exhibit >0.89 correlation. To evaluate the performance and the accuracy of the proposed method, it was compared with a collection of sequence prediction techniques, including LSTM and GRU. It was concluded that the DBN-RNN has the best accuracy and performance among these methods. Validation of the strategy was planned to be done on the scaled autonomous vehicle test platform developed in Smart Hybrid and Electric Vehicles Systems (SHEVS) lab, where driver-in-the-loop hardware was incorporated and the equipment were prepared but due to COVID-19 closures was not realized.