A longitudinal examination of the associations between cannabis use, physical activity, and CSEP guideline achievement among youth in the COMPASS study 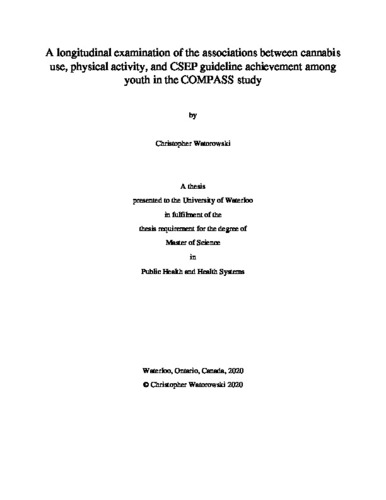 Background: There is a lack of conclusive longitudinal literature regarding cannabis use frequency and physical activity in Canadian youth. While it is documented that rates of physical activity are decreasing and cannabis use in Canadian youth is among the highest in the world, the strength and direction of this longitudinal association is contradictory. Objectives: This thesis will examine the relationship between cannabis use and physical activity through two main objectives: 1) Are the changes in cannabis use frequency over time associated with the relative change in MVPA? 2) Are the changes in cannabis use frequency over time associated with the likelihood of meeting the CSEP PA guidelines at two-year follow-up? Methods: Data from years 5 (2016-17), 6 (2017-18), and 7 (2018-19) of the COMPASS study were used. Overall, 7400 Grade 9 to 12 students attending 75 schools were included in the analyses. Linear mixed regression models and generalized estimating equations were used to longitudinally examine the associations between student-level characteristics and cannabis use on the relative change in MVPA and the likelihood of meeting the CSEP guidelines, respectively. Results: Less than a third (28%) of youth reported achieving the CSEP guidelines at baseline, with the average MVPA decreasing by approximately 12% from baseline to two-year follow-up. Cannabis use in youth also increased from approximately 8% to approximately 31% by two-year follow-up. However, it was found that neither the increase nor the decrease in cannabis use was associated with either relative changes in MVPA or CSEP guideline achievement at two-year follow-up. A decrease in relative MVPA was seen for students who reported being underweight (β= -14.4 (SE=6.48)), and had met the CSEP guidelines at baseline (β= -56.6 (SE=4.65)), where an increase in relative MVPA was seen for those who were in grade 11 (β= 47.7 (SE=17.81)). Youth who were males (aOR=2.07, 95% CI = 1.83, 2.34), current binge drinkers (aOR=1.35, 95% CI = 1.09, 1.69), and met the guidelines at baseline (aOR=3.59, 95% CI = 3.16, 4.09) had higher odds of meeting the CSEP guidelines at two-year follow-up. Students who were non-white (aOR=0.86, 95% CI = 0.75, 0.98), were underweight (aOR = 0.82, 95% CI = 0.68, 0.98) or had not stated weight status (aOR = 0.63, 95% CI = 0.55, 0.72) were of lower odds of meeting the CSEP guidelines at two-year follow-up. The interaction between cannabis use and CSEP achievement at baseline was not significantly associated with CSEP achievement at two-year follow-up. Conclusion: Few student-level characteristics were associated with CSEP guideline achievement and relative MVPA in youth. However, this research provides a valuable understanding to this longitudinal association with cannabis use and other student-level characteristics. Using this research, future initiatives can better prioritize the needs of at-risk student populations. Future research should continue to investigate this complex relationship longitudinally in attempt to promote youth health and mitigate harmful health behaviours.

Christopher Watorowski (2020). A longitudinal examination of the associations between cannabis use, physical activity, and CSEP guideline achievement among youth in the COMPASS study. UWSpace. http://hdl.handle.net/10012/16558