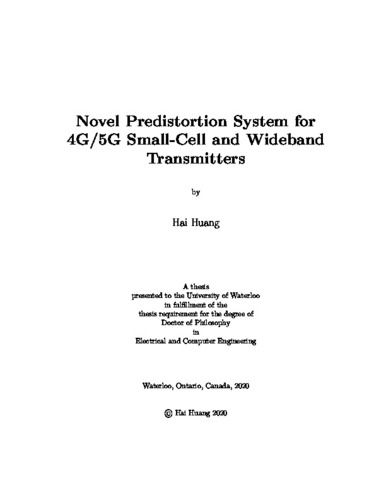 To meet the growing demand for mobile data, various technologies are being introduced to wireless networks to increase system capacity. On one hand, large number of small-cell base stations are adopted to serve the reduced cell size; on the other hand, millimeter wave (mm-wave) systems with large antenna arrays that transmit ultra-wideband signals are expected in fifth generation (5G) networks. Power amplifiers (PAs), responsible for boosting the radio frequency (RF) signal power, are the most critical components in base station transmitters, and dominate the overall efficiency and linearity of the system. The design challenges to balance the contradictory requirements of efficiency and linearity of the PAs are usually addressed by linearization techniques, particularly the digital predistortion (DPD) system. However, existing DPD solutions face increasing difficulties keeping up with new developments in base station technologies. When considering sub-6 GHz small-cell base station transmitters, analog and RF predistortion techniques have recently received renewed attention due to their inherent low power nature. Their achievable linearization capacity is significantly limited, however, largely by their implementation complexity in realizing the needed predistortion models in analog circuitry. On the other hand, despite significant developments in DPD models for wideband signals, the implementations of such DPD models in practical hardware have received relatively little attention. Yet the conventional implementation of a DPD engine is limited by the maximum clock frequency of the digital circuitry employed and cannot be scaled to satisfy the growing bandwidth of transmitted signals for 5G networks. Furthermore, both analog and digital solutions require a transmitter-observation-receiver (TOR) to capture the PA outputs, necessitates the use of analog-to-digital converters (ADCs) whose complexity and power consumption increase with signal bandwidth. Such trend is not scalable for future base stations, and new innovations in feedback and training methods are required. This thesis presents a number of contributions to address the above identified challenges. To reduce the power overhead of the linearization system, a digitally-assisted analog-RF predistortion (DA-ARFPD) system that uses a novel predistortion model is introduced. The proposed finite-impulse-response assisted envelope memory polynomial (FIR-EMP) model allows for a reduction of hardware implementation complexity while maintaining good linearization capacity and low power overhead. A two-step small-signal-assisted parameter identification (SSAPI) algorithm is devised to estimate the parameters of the two main blocks of the FIR-EMP model, such that the training can be completed efficiently. A DA-ARFPD test bench has been built, which incorporates major RF components, to assess the validity of the proposed FIR-EMP scheme and the SSAPI algorithm. Measurement results show that the proposed FIR-EMP model with SSAPI algorithm can successfully linearize multiple PAs driven with various wideband and carrier-aggregated signals of up to 80~MHz modulation bandwidths for sub-6 GHz systems. Next, a hardware-efficient real-time DPD system with scalable linearization bandwidth for ultra-wideband 5G mm-wave transmitters is proposed. It uses a novel parallel-processing DPD engine architecture to process multiple samples per clock cycle, overcomes the linearization bandwidth limit imposed by the maximum clock rate of digital circuits used in conventional DPD implementation. Potentially unlimited linearization bandwidth could be achieved by using the proposed system with current digital circuit technologies. The linearization performance and bandwidth scalability of the proposed system is demonstrated experimentally using a silicon-based Doherty (DPA) with 400 MHz wideband signal operating at 28 GHz, and over-the-air measurements using a 64-element beamforming array with 800 MHz wideband signal, also at 28 GHz. The proposed DPD system achieves over 2.4 GHz linearization bandwidth using only a 300 MHz core clock for the digital circuits. Finally, to reduce the power consumption and cost of the TOR, a new approach to train the predistorter using under-sampled feedback signal is presented. Using aliased samples of the PA's output captured at either baseband or intermedia frequency (IF), the proposed algorithm is able to compute the coefficients of the predistortion engine to linearize the PA using a direct learning architecture. Experimentally, both the baseband and IF schemes achieve linearization performance comparable to a full-rate system. Implemented together with a parallel-processing based DPD engine on a field-programmable gate array (FPGA) based system-on-chip (SOC), the proposed feedback and training solution achieves over 2.4~GHz linearization bandwidth using an ADC operating at a clock rate of 200 MHz. Its performance is demonstrated experimentally by linearizing a silicon DPA with 200 MHz and 400 MHz signals in conductive measurements, and a 64-element beamforming array with 400 MHz and 800 MHz signals in over-the-air testing.