A Comprehensive analysis of Dental Remains from the Early Bronze Age I site of Wadi Faynan 100, Jordan 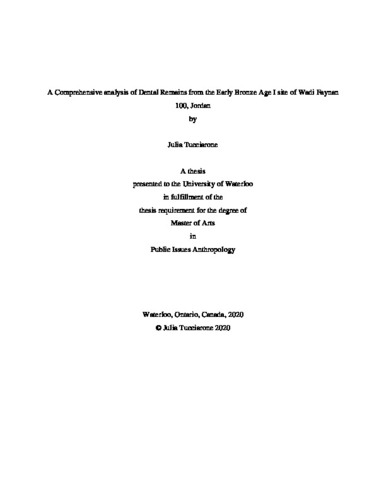 Five looted Early Bronze Age Tombs were excavated at the site of Wadi Faynan 100, Southern Jordan, in 2019. While archaeological site looting is a common problem worldwide, the lack of research utilizing commingled and fragmented burial assemblages is an inherent bias in bioarchaeological research. This preliminary study uses dental anthropological methodology to learn as much as possible about the individuals buried at Wadi Faynan 100 despite their fragmentation and commingling due to looting, specifically by calculating minimum number of individuals (MNI), recording nonmetric traits, dental wear, tooth development for age-at death, and pathology (enamel defects, caries, and calculus). Results yielded an MNI of 14 using teeth alone and tooth development indicated a large proportion of subadult individuals, particularly in Grave 3. Nonmetric traits were not conclusive but not out of place when compared to other Jordanian archaeological populations. Dental wear rates were quite low, possibly a result of the age profile of the population, and pathology showed a high rate of linear enamel hypoplasia, suggesting childhood stress in the population, an extremely low caries rate and a low calculus rate, which again may be a result of the ages of the individuals. Overall, this research demonstrates the ability to use even fragmented and commingled assemblages to learn about individuals in the past, and guide future research projects.