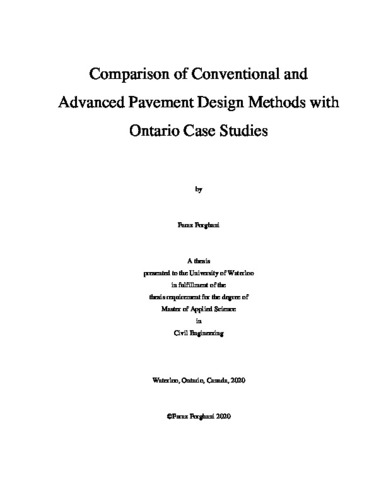 Many methods have been used to effectively design a pavement structure that carries the required traffic loads. In Canada, American Association of State Highway and Transportation Officials 93 (AASHTO 93), Shell Pavement Design (Shell), and Mechanistic-Empirical Pavement Design Guide (MEPDG) are examples of pavement design methods. AASHTO 93 and Shell simplify the effects of loading by using equivalent single axle loads which do not truly capture the effect of truck configurations. Other parameters that AASHTO 93 and Shell do not address are environmental conditions, loading effects of truck configurations, road geometry, or the behaviour of materials within the pavement structure. MEPDG has begun to address some of these limitations, but the models have not been finalized and require local calibrations for result accuracy. University of Waterloo has partnered with PSI Technologies Inc. to evaluate the conventional design strategies in Canada using a mechanistic pavement design method, PSIPave 3DTM. This method uses three-dimensional modelling to evaluate the pavement responses under traffic loads considering the effects of road geometry and truck configuration. PSIPave 3DTM outputs the normal and shear strains anywhere in the pavement structure. Designs were provided for three road sections in Hamilton, Ontario using AASHTO 93, Shell and MEPDG. The pavement structure for each road design were ran in PSIPave 3DTM to evaluate different cases of geometry, tire types and bus configurations. Based on these findings, the greatest impact of geometry was observed in the subgrade side slope but was found to have minimal effects on the normal strains under the loading. In comparison to the traditional dual tires (11R22.5), the super singles (455/55R22.5) were found to cause more damage (fatigue and shear) in the upper layers and it was found that the effect of tire pressure dissipates as the structure is investigated closer to the subgrade layer. The effect of changing bus configurations has an effect on the strains as well. As the single axle is changed to a tandem axle, a major strain reduction occurred. In terms of fatigue damage, an increase by a factor of approximately 2 was observed for the number of load repetitions to fatigue failure whereas changing to dual tires on a single axle only causes an increase by a factor of 1.34.