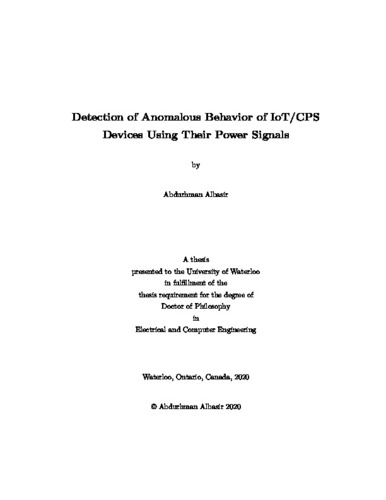 Embedded computing devices, in the Internet of Things (IoT) or Cyber-Physical Systems (CPS), are becoming pervasive in many domains around the world. Their wide deployment in simple applications (e.g., smart buildings, fleet management, and smart agriculture) or in more critical operations (e.g., industrial control, smart power grids, and self-driving cars) creates significant market potential ($ 4-11 trillion in annual revenue is expected by 2025). A main requirement for the success of such systems and applications is the capacity to ensure the performance of these devices. This task includes equipping them to be resilient against security threats and failures. Globally, several critical infrastructure applications have been the target of cyber attacks. These recent incidents, as well as the rich applicable literature, confirm that more research is needed to overcome such challenges. Consequently, the need for robust approaches that detect anomalous behaving devices in security and safety-critical applications has become paramount. Solving such a problem minimizes different kinds of losses (e.g., confidential data theft, financial loss, service access restriction, or even casualties). In light of the aforementioned motivation and discussion, this thesis focuses on the problem of detecting the anomalous behavior of IoT/CPS devices by considering their side-channel information. Solving such a problem is extremely important in maintaining the security and dependability of critical systems and applications. Although several side-channel based approaches are found in the literature, there are still important research gaps that need to be addressed. First, the intrusive nature of the monitoring in some of the proposed techniques results in resources overhead and requires instrumentation of the internal components of a device, which makes them impractical. It also raises a data integrity flag. Second, the lack of realistic experimental power consumption datasets that reflect the normal and anomalous behaviors of IoT and CPS devices has prevented fair and coherent comparisons with the state of the art in this domain. Finally, most of the research to date has concentrated on the accuracy of detection and not the novelty of detecting new anomalies. Such a direction relies on: (i) the availability of labeled datasets; (ii) the complexity of the extracted features; and (iii) the available compute resources. These assumptions and requirements are usually unrealistic and unrepresentative. This research aims to bridge these gaps as follows. First, this study extends the state of the art that adopts the idea of leveraging the power consumption of devices as a signal and the concept of decoupling the monitoring system and the devices to be monitored to detect and classify the "operational health'' of the devices. Second, this thesis provides and builds power consumption-based datasets that can be utilized by AI as well as security research communities to validate newly developed detection techniques. The collected datasets cover a wide range of anomalous device behavior due to the main aspects of device security (i.e., confidentiality, integrity, and availability) and partial system failures. The extensive experiments include: a wide spectrum of various emulated malware scenarios; five real malware applications taken from the well-known Drebin dataset; distributed denial of service attack (DDOS) where an IoT device is treated as: (1) a victim of a DDOS attack, and (2) the source of a DDOS attack; cryptomining malware where the resources of an IoT device are being hijacked to be used to advantage of the attacker’s wish and desire; and faulty CPU cores. This level of extensive validation has not yet been reported in any study in the literature. Third, this research presents a novel supervised technique to detect anomalous device behavior based on transforming the problem into an image classification problem. The main aim of this methodology is to improve the detection performance. In order to achieve the goals of this study, the methodology combines two powerful computer vision tools, namely Histograms of Oriented Gradients (HOG) and a Convolutional Neural Network (CNN). Such a detection technique is not only useful in this present case but can contribute to most time-series classification (TSC) problems. Finally, this thesis proposes a novel unsupervised detection technique that requires only the normal behavior of a device in the training phase. Therefore, this methodology aims at detecting new/unseen anomalous behavior. The methodology leverages the power consumption of a device and Restricted Boltzmann Machine (RBM) AutoEncoders (AE) to build a model that makes them more robust to the presence of security threats. The methodology makes use of stacked RBM AE and Principal Component Analysis (PCA) to extract feature vector based on AE's reconstruction errors. A One-Class Support Vector Machine (OC-SVM) classifier is then trained to perform the detection task. Across 18 different datasets, both of our proposed detection techniques demonstrated high detection performance with at least ~ 88% accuracy and 85% F-Score on average. The empirical results indicate the effectiveness of the proposed techniques and demonstrated improved detection performance gain of 9% - 17% over results reported in other methods.