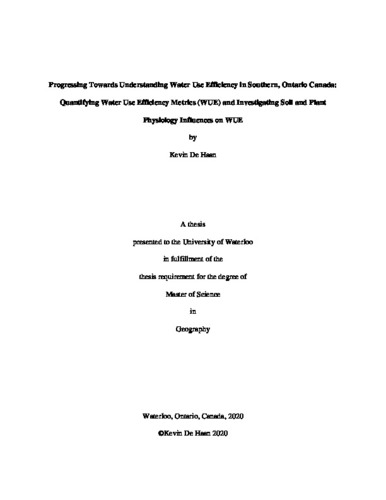 Climate change, and corresponding temperature increases of 1.4 - 4.8 ºC by the end of the century, are expected to cause shifts in agricultural production. Additionally, shifts in precipitation patterns are expected to cause strains on water resources. Globally, croplands occupy 33-40% of terrestrial land area with only 17-18% of these being irrigated; thus, rainfed croplands will remain important to global food production. This highlights the need to maximize crop resource use while responding to environment shifts and maximizing agricultural production. Water use efficiency (WUE), which measures carbon assimilation per unit water use, has been identified as an important indicator for plant resource use, which has the potential to provide insight into responses of environmental changes. However, there is a paucity of information on differences between crop species WUE or the drivers behind these differences, which are important to consider in climate change scenarios. Furthermore, there are several calculations for WUE, but there is a lack of field-based studies investigating inconsistencies between these calculations. This thesis addresses these knowledge gaps with the following two objectives: 1) quantify plant water-carbon dynamics of two common forage crops in southern Ontario, maize (Zea mays L.) and alfalfa (Medicago sativa), and investigate the ecosystem drivers of these differences; and 2) quantify WUE of alfalfa and maize crops using different WUE calculation approaches, and investigate the inconsistencies between these methods. Alfalfa contained greater growing season ecosystem WUE (EWUE) than maize, with daily fluctuations in EWUE being controlled by differences in gross primary productivity (GPP) rather than evapotranspiration (ET). Since these sites were subjected to similar climate and atmospheric variables, and similar soil conditions, differences between the crops were attributed to crop physiology and farming practices which influenced crop growth. In general, alfalfa had higher growing season “flux-based” EWUE’s, while maize had higher “harvest-based” WUE’s (HWUE’s). Inconsistencies between methods were attributed to processing method, crop physiology, and management influences on crop growth. The importance of timescale was also shown where the typically less efficient C3 crop (alfalfa) had higher growing season EWUE despite having a lower median half-hourly EWUE The results of this thesis progressed our knowledge of WUE and how crop selection and farming practices influence it. Farming practices that affect crop growth influence these metrics, which can inform future crop selections and aid in adaptation to climate change. This also highlights the importance of considering different variables included in WUE calculations and the need for a more robust approach to crop resource use which accounts for both plant stomatal responses, non-plant ecosystem responses, and biomass production.