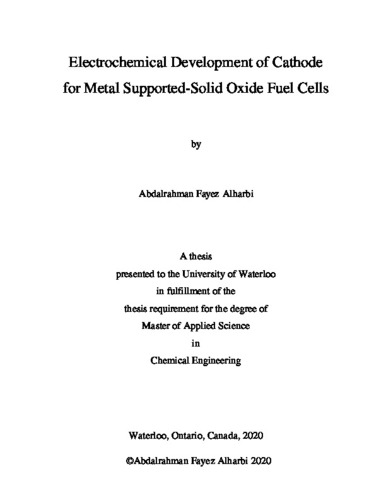 In comparison to conventional generation systems, the use of Solid Oxide Fuel Cells (SOFCs) provides higher electrical efficiency and lower carbon emissions. Furthermore, contrary to other fuel cell types, SOFC is considered fuel flexible as it can use a variety of fuels, such as hydrogen, alcohol, natural gas and other hydrocarbons or syngas. Nevertheless, SOFCs is expensive in terms of fabrication cost, as it is made essentially of advanced ceramic materials because of its high operating temperature (600-900°C). Much effort has been devoted to reduce cost, one possibility being the use of metal-supported solid oxide fuel cell (MS-SOFC). Cost reduction with MS-SOFC takes place because cheaper metal materials can replace some ceramic ones. Indeed, in MS-SOFC, the supporting structure is made of porous metal, on which are deposited thin ceramic layers for the anode, electrolyte and cathode. In traditional SOFC, one of those ceramic layers (typically the anode) is made thicker to support the whole assembly. Besides cost, there are other important advantages in using MS-SOFCs as they possess high oxidation resistance, mechanical stability and tolerance to redox cycles. On the other hand, there are important challenges in the fabrication of MS-SOFC as very high temperatures are involved to make dense electrolyte, which normally is done in air, but not in the present case to avoid extensive oxidation of the metal at those high temperatures (above 1200°C). Another constraint is that the coefficient of thermal expansion (CTE) of the porous metal support must match the CTE of the ceramic materials, such as yttrium stabilized zirconia (YSZ), typically used as electrolyte. The fabrication method considered in this work is tape casting of different layers followed by co-sintering (under reducing atmosphere). In this thesis, SS-430 L and YSZ have been used as metal support and electrolyte, respectively. However, the main focus of this study is on the cathode, for which two different types of cathode material/preparation were considered: 1) ex-situ sintering of a printed stand-alone cathode layer and 2) infiltration of cathode materials on a cathode scaffold. For the first type, La0.58Sr0.4Co0.2Fe0.8O3−δ mixed with Gadolinium Doped Ceria (LSFC-GDC) was used as cathode materials. For the second type, Samarium Barium Strontium Cobalt oxide (SBSCo) was infiltrated in the cathode scaffold. Cell performance was evaluated through IV curve, power density, and electrochemical impedance spectroscopy. The cell with printed stand-alone cathode showed very poor performance in terms of Maximum Power Density (MPD) (less than 5 mW/cm2), associated with very high polarization resistance. In comparison with printed stand-alone cathode structure, the cell with the cathode scaffold showed much better performance in terms of Maximum Power Density (MPD) (140 mW/cm2) , but more tuning is still required to make it comparable to state-of-the-art SOFC.