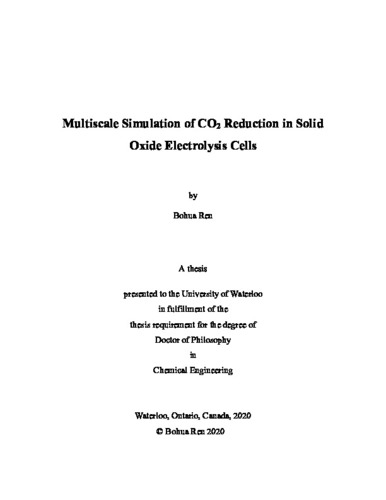 Electrochemical CO2 reduction in solid oxide electrolysis cell (SOEC) is a promising technology to address the global issue of greenhouse emissions. SOEC operates at high temperatures (>873K), possessing high energy efficiency. The products from CO2 reduction in SOEC, i.e. CO, can be used in the Fischer–Tropsch process by mixing with H2 (syngas) to produce chemicals and fuels. An efficient cathode electrocatalyst for reducing CO2 is a pre-requisite in SOEC. However, the main challenges for electrocatalysts are: 1) improvement of the catalytic activity and durability of cathode materials and 2) better understanding of the CO2 electroreduction mechanism to accelerate the development of SOEC. The objectives of this thesis are to study CO2 reduction mechanism in SOEC and provide new insights for the design of catalysts through multiscale modelling, i.e. periodic density functional theory (DFT) calculations, microkinetic simulations, and multiphysics modelling. Two different cathode materials were considered in this work: 1) Nickel (Ni)/Samaria Doped Ceria (SDC) and 2) Perovskite La(Sr)FeO3−δ (LSF). Ni/SDC has high catalytic activity towards CO2 electrolysis but suffers from Ni oxidation and carbon deposition. To understand the CO2 electroreduction mechanism at the three-phase boundary (TPB) of Ni/SDC, two simulation approaches have been performed: a) DFT combined microkinetic modelling (Chapter 3). The effect of oxygen vacancy locations on CO2 reduction reaction at the TPB have been studied using DFT +U calculations. Based on the DFT results, a micro-kinetic analysis was conducted to determine the rate-controlling step under various SOEC operating voltages at 1000 K. The analysis reveals that interface oxygen vacancy can notably boost CO2 adsorption and reduction. The rate-controlling step will change from the oxygen spillover step to the CO desorption step with an increase in cathode overpotential on Ni(111)/SDC surface with non-interface oxygen vacancy. However, CO desorption is the dominating rate-controlling step on Ni(111)/SDC surface with interface oxygen vacancy. b) DFT based Multiphysics modelling (Chapter 4).To further extend the understanding regarding CO2 electrolysis at of Ni/SDC, the resulting kinetic data from DFT were incorporated into a two-dimensional SOEC multi-physics model. Three reaction mechanisms were proposed to describe the charge transfer steps. The results show that the most likely charge transfer step is CO2(s)+(s)+2e− ↔ CO(s)+O(s)2-. Sensitivity analysis results show that CO desorption is the rate-controlling step. The effects of CO/CO2 ratio and temperature indicates that a temperature of 700 ℃ or above and CO/CO2 inlet ratio of 1:1~1:3 are recommended to maintain a low content of carbon deposition, low polarization resistance and high current density. Compared to Ni/SDC, perovskite La(Sr)FeO3−δ (LSF) based materials have better coking resistance but lower catalytic activity. To explore the catalytic mechanism and predict active LSF based material, DFT combined microkinetic modelling were also employed (Chapter 5). CO2 adsorption and reduction reaction mechanism were investigated on 12 surface models describing the effects of surface oxygen vacancies and Ni/Mn doping. In particular, a phase diagram was established to find the most stable LSF structure under SOEC operating conditions. Ni-Mn double doping with 2 surface oxygen vacancies of LSF was identified as the most effective electrocatalysts. Experimental studies for this material have yet to be reported in the literature.