Children use probability to infer other people’s emotions 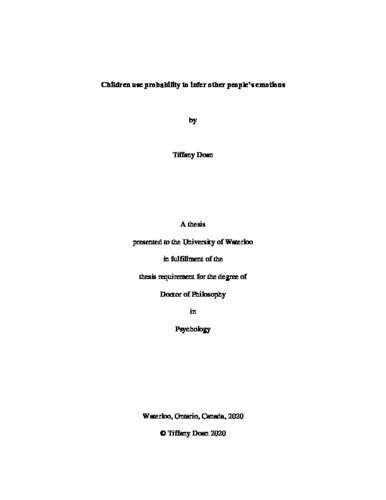 People’s emotional reactions often depend on probability. However, it is unknown whether children consider probability when inferring other people’s emotions. Across three papers, this dissertation shows that children (N = 1465) and adults (N = 481) use probabilistic information when inferring emotions and that this ability develops with age. Chapter Two examined whether children use probability when inferring other people’s surprise (four experiments). When inferring who would be surprised about getting a red gumball, 7-year-olds inferred that the person who had a lower chance of receiving a red gumball would be surprised, but younger children did not. Six-year-olds’ surprise inferences improved when they were prompted to consider probability, but not when prompted to consider others’ prior beliefs. Together, the findings from this chapter show development in children’s ability to use probability to infer surprise. Chapter Three examined whether children and adults use probability when inferring other people’s happiness (five experiments). When judging the quality of an outcome of two yummy and two yucky gumballs, by age 4, children judged that this outcome is better if it came from a gumball machine that contained mostly yucky gumballs than if it came from a machine that contained mostly yummy gumballs. However, it is not until age 5 that they also recognize that people would be happier with this outcome if it came from the former machine rather than the latter machine. Together, the findings from this chapter show development in children’s ability to use probability to infer happiness and a developmental lag between children’s assessments of quality and happiness. Chapter Four examined whether children and adults consider close counterfactual alternatives (that are manipulated through probability) when inferring other people’s happiness and whether they recognize that an event had a close counterfactual alternative (four experiments). When inferring a person’s happiness about choosing a regular balloon (on a blind choice) from ten closed boxes, 6-year-olds inferred that the person would be happier if they later learned that most of the remaining boxes also held regular balloons than if they mostly held special balloons. However, when asked explicitly about the counterfactual alternative, they did not recognize that a special balloon could have easily been obtained when most of the boxes contained them. Younger children did not make either inference. Children’s happiness inferences improved when extra cues were provided, such that 5- and 6-year-olds inferred that a person would be happier when they later learned that they had been physically close to many regular balloons compared to when they were physically close to many special balloons. Six-year-olds also acknowledged that the special balloon was a close counterfactual alternative when the special balloons were physically close and more numerous. Together, the findings from this chapter show that children either infer happiness without considering close counterfactual alternatives, or that counterfactuals influence children’s happiness inferences before they can explicitly acknowledge their closeness. As a whole, this dissertation provides evidence that children use probabilistic information to infer other people’s emotions.