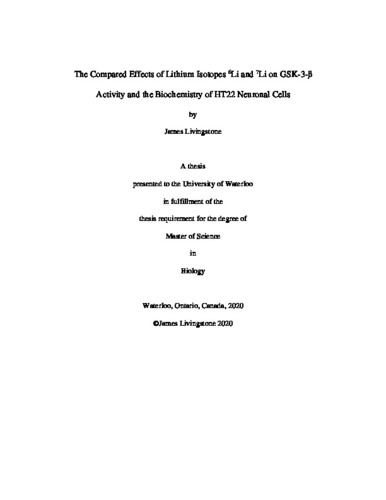 The use of lithium in treatment of mental illnesses like bipolar disorder, major depressive disorder, and schizophrenia dates to the mid 20th century. Some research also indicates that the symptoms of Alzheimer’s Disease can be lessened by lithium treatment. But despite widespread use, the complete mechanisms through which lithium works are largely unknown. The “isotopically impure” lithium used to treat these disorders is comprised of approximately 7.59% ⁶Li and 92.41% ⁷Li, about the normal distribution of the lithium isotopes in nature. Pharmacologically, no distinction has been made between the two isotopes. However, preliminary animal model research suggests that these isotopes may have differential effects on the maternal behaviours of rats, while other cellular research has found a difference in the sustained concentration of each isotope in both neural cells and erythrocytes. The research presented here investigates the possibility that the isotopes ⁶Li and ⁷Li may have different effects on neuronal physiology and molecular processes. No significant difference was found on the rate of glycogen synthase kinase-3-β (GSK-3-β) activity, GSK-3-β phosphorylation rates in HT22 cells, or HT22 cell viability when treated with ⁶Li and ⁷Li. However, a possible difference has been found in the sustained lithium isotope concentrations across the HT22 plasma membrane. More research is needed to confirm and elucidate this global set of data, but the results presented here indicate a reasonable possibility that lithium isotopes are differentially fractionated across the HT22 plasma membrane.