Quantum Methodologies for the simulation of molecular hydrogen: from dimers to linear chains 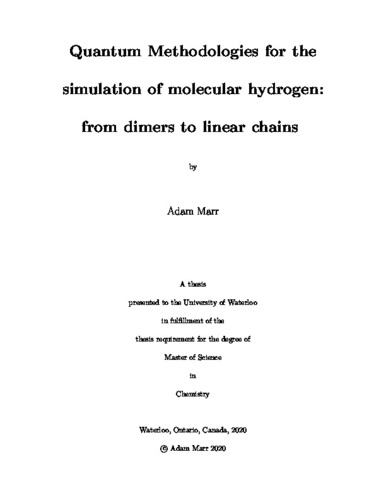 Hydrogen has long been considered an ideal model system for a variety of molecular configurations, given its chemical simplicity and ubiquitous nature in the world. However, the weak van der Waals forces that exist between hydrogen molecules have often been challenging to model, with work in developing a thorough analytical and numerical potential energy surface dating back decades. In this thesis, we consider a theoretical approach to hydrogen-based systems. We draw on well known properties of spherical harmonics to produce vibrational Raman and Infrared results, with good agreement to prior experimental work and for the prediction of results for isotopologues involving deuterium and tritium. As part of this analysis, both spin isomers (para and ortho) are considered; a full range of nuclear spin considerations are discussed as a means of helping to explore spectroscopic intensities. We consider efficient diagonalization techniques and basis reduction tools, in conjunction with the general theme of symmetrization. This model is also extended to an adiabatic setup, where a more 'primitive' basis is considered; in this configuration, the rotors are assumed to be decoupled from one another without end-over-end rotation of the dimer and are fixed in space. By analyzing the various states at different intermolecular distances, we are able to explore the suitability of this model in comparison to the full coupled results. We then extend these findings to chains of hydrogen molecules; here, we explore both an exact diagonalization technique as well as a singular value decomposition and one-body operator method for use with the density matrix renormalization group. Ultimately, this work will help lay a foundation for other arrangements of hydrogen (e.g. clusters, solid hydrogen) and similar homonuclear diatomic molecules, such as nitrogen or oxygen.