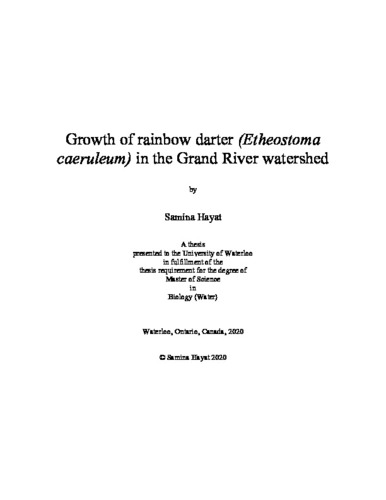 Assessment of growth is an important tool in fisheries assessment and management and provides valuable insight into biological responses to stressors in biomonitoring programs. A small-bodied fish species, rainbow darter (Etheostoma caeruleum), has been used as a sentinel species for numerous studies on the impacts of municipal wastewater effluent (MWWE) on fish health in the Grand River. The Waterloo wastewater treatment plant (WWTP) has undergone major infrastructure upgrades that were completed in 2017 and resulted in improved effluent quality. Previous studies have documented changes in a variety of endpoints in rainbow darter including condition and somatic indices such as gonadosomatic index (GSI) and liver somatic index (LSI), but limited research has occurred on population level endpoints such as growth. The objective of this study was to compare growth of rainbow darter upstream and downstream of the Waterloo WWTP before and after the WWTP was upgraded in 2017. Fish were collected during the fall of 2014, 2018 and 2019 and fish length, weight, liver weight and gonad weight were recorded, and sagittal otoliths were extracted to age fish. Parameters from von Bertalanffy growth model and somatic indices were used to characterize growth differences between sexes and across sites and years. The back-calculation method was validated for rainbow darter in the Grand River, and the biologically modified Fraser-Lee equation was used to estimate past length for the 2014 fish population as an approach to increase sample sizes. Growth and size-at-age consistently differed between males and females, with male fish growing to a larger size at a faster rate than female fish across most sites and years. Fish growth was also faster at the two downstream sites relative to the upstream reference sites across years, but there was no consistent effect that could be associated with the WWTP, although fish growth and size-at-age were observed to increase post-upgrades. Although no significant differences in LSI and GSI between sites were evident, there was variation in LSI and GSI across years with slight increases in LSI and GSI post-upgrades. This study has increased our understanding of fish growth in an urbanized watershed. The use of the von Bertalanffy growth model for rainbow darter is a reliable and accurate method to assess a more sensitive population level endpoint. The use of a back-calculation method to obtain past length-at-age is a powerful tool that can be utilized to understand rainbow darter growth in previous years when sample sizes are low. This study supports the incorporation of estimates of growth rate in biomonitoring programs with small bodied fish, such as rainbow darter, to detect subtle, population level impacts in aquatic ecosystems.