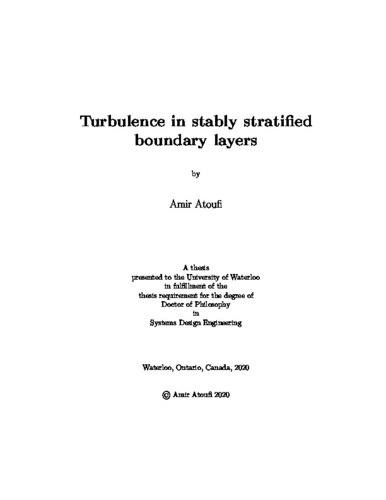 In this thesis, turbulence dynamics for a stably stratified boundary layer is studied. The processes by which stable boundary layers are formed through strong surface cooling imposed on neutrally stratified wall-bounded turbulence is explored first using high-resolution direct numerical simulation at a moderate Reynolds number. The adjustment of the flow to the imposed strong surface cooling is investigated. Secondly, characteristics of near-wall turbulence at quasi-stationarity under strong wall cooling are studied. It is shown that if turbulence reaches quasi-stationarity, the characteristics of quasi-stationary near-wall turbulence, even with the strongest wall cooling rate, are generally similar to the weakly stratified case. The effects of strong stable stratification on the characteristics of near-wall turbulence are transient. It is shown that among mechanisms that contribute to the budget of turbulent kinetic energy, transfer and pressure-work are more dependent on the stratification if turbulence reaches quasi-stationarity. Buoyancy destruction has a considerable effect on the evolution of turbulence producing eddies but not on production itself at stationarity. Relevant length scales are also discussed in detail. In summary, it is found that the behaviour of near-wall turbulence at quasi-stationarity is approximately similar to weakly stratified cases, regardless of the choice of upper boundary condition. Finally, the kinetic energy cascade in a stably stratified boundary layer is investigated. A mathematical framework to incorporate vertical scales into the conventional kinetic energy spectrum and its budget is introduced. It is shown that energetic streamwise scales ($\lambda_x$) become larger with increasing vertical scale. For the strongest stratification, for which the turbulence becomes intermittent, the energetic streamwise scales are suppressed, and energy density resides in $\lambda_x$ of the size of the domain. It is shown that in the unstratified case, vertical scales of the size comparable to the height of the logarithmic layer connect viscous regions to the outer layer. By contrast, in stratified cases, such a connection is not observed.