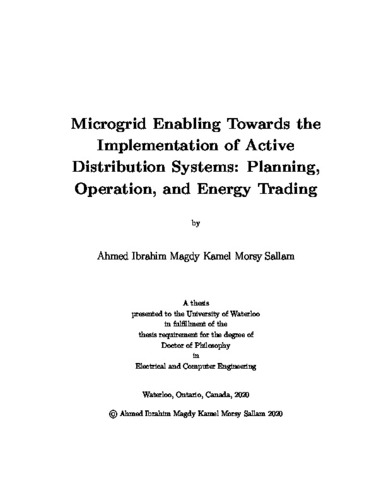 Recent years have perceived a substantial surge in interest in green technologies due to the growing awareness about the environmental concerns and the technologies’ development, which have resulted in considerable utilization of DC-based distributed generators (DGs) and loads such as photovoltaic (PV) panels and electric vehicles. This increased penetration has reformed the generation and utilization of electric, resulting in promoting the microgrids (μGs) as a promising candidate for future systems. Despite the well-establishment and the extensive studies of μGs, there is still some debate over having μGs that are purely AC, purely DC, or AC-DC hybrid. Purely AC and purely DC configurations cannot meet the challenges and the new technologies that are expected to emerge in the near future as they require many interfacing converters to accommodate the high penetration of DC DGs and loads. These interfacing converters increase the system costs, the conversion losses, and the system complexity. The aforementioned reasons have resulted in the consensus tending towards a new vision of combining the AC and DC to acquire the benefits of both systems, which calls for further investigation of the AC-DC system compositions. The growing electricity demand, aging of the power system infrastructure, and countries effort to utilize renewable-based DGs have stimulated the concept of isolated μGs.Isolated μGs could allow utilities and developers to defer the installation of new generation capacities, in addition to transmission and distribution capacities upgrades by connecting distributed energy resources. Despite the significant benefits provided by isolated μGs, preserving load-generation balance is comprehensively challenging, given that μGs are dominated by renewable-based DGs, which are characterized by their probabilistic nature and intermittent power. This challenge introduced the interconnection of μGs as a promising solution that enhance the system operation and increase the system reliability. The interconnection of a group ofμGs essentially leads to a (small scale) energy market of interconnected microgrids (IμGs) when these μGs exchange energy with each other. Therefore, it is vital to refine and enhance the way in which players from different μGs construct the interconnected μGs and manage electricity trading. Driven by the aforementioned challenges, the main objective of this thesis is to promote the concept of μG and optimally accommodate the expected increased penetration of DC DGs and DC loads in future systems, and ensure the continuity of power supplied to these future systems through their interconnection and managing the energy trading process. Achieving this target entailed the completion of the following parts: 1) Proposing the bilayer μGs configuration, in addition to its power flow model, at which each node is a universal node that can include two buses with different types of power (AC and DC) or a single bus (AC or DC). The inclusion of the two types of power reduces the number of interfacing converters and allows for the accommodation of the increased penetration of DC DGs and loads besides the existing conventional AC DGs and loads. 2) Proposing a stochastic planning framework for the network configuration of AC-DC bilayer μGs that is capable of minimizing the total system costs through the determination of the optimal BμGconfiguration. 3) Investigating the AC-DC bilayer μGs operation under fault conditions and introducing a multilevel converter with fault confining capability that can isolate the faulty layer, and hence ensures optimal and reliable operation of the healthy layer under fault conditions. 4) The proposal of a stochastic planning framework for the IμGs that minimizes the total system costs and minimizes the loads curtailment under DG failure, while considering the stochastic variations of the renewable-based DGs and loads. 5) Developing an energy trading mechanism that facilitates the power trading between the interconnected μGs, provides full utilization of the renewable output power, minimizes operation cost, and minimizes load curtailment.