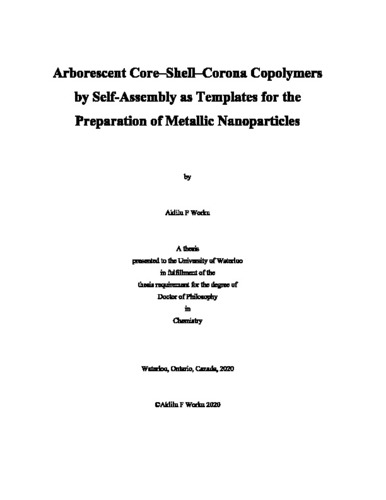 The preparation of metallic nanoparticles has been a rapidly growing field of research in recent years, because of the unique physical properties and applications of these materials. The development of applications for nanomaterials and nanostructures generally requires control over their size, size distribution, morphology, and chemical composition. Different methods have been developed to that end. Arborescent copolymers, a unique type of graft copolymers with a dendritic architecture, were previously investigated as templates for the preparation of metallic nanoparticles. Specifically, polystyrene-graft-[poly(2-vinylpyridine)-block-polystyrene] copolymers were obtained by successive functionalization and anionic grafting reactions leading to a covalently bonded, layered structure with a core of arborescent polystyrene, an inner shell of poly(2-vinyl pyridine) (P2VP), and a corona of polystyrene chains. While these materials were shown to be useful as template, due to their inherent stability, their synthesis was limited by very low grafting yields in most cases. In this Thesis a new method is demonstrated for the preparation of arborescent core–shell–corona structures called arborescent copolymer complexes (ACC), namely polystyrene-graft-poly(2-vinylpyridine)-graft-poly(acrylic acid)-block-polystyrene, obtained by the self-assembly of arborescent polystyrene-graft-poly(2-vinylpyridine) copolymers with poly(acrylic acid)-block-polystyrene copolymers via weak acid–weak base interactions. It involves anionic grafting for the synthesis of the arborescent polystyrene-graft-poly(2-vinyl pyridine) substrates, atom transfer radical polymerization (ATRP) to synthesize the poly(acrylic acid)-block-polystyrene copolymers, and mixing the two components in solution in appropriate ratios to prepare the polymeric templates in high yield. This is a new, simpler approach to the synthesis of core–shell–corona (CSC) structures comparable to those obtained by tedious anionic grafting procedures using “living” block copolymers. The complexation reaction was investigated using dynamic light scattering (DLS), transmission electron microscopy (TEM) and atomic force microscopy (AFM) analysis. In most cases, an increase in size was observed after a substrate was complexed with a block copolymer to yield self-assembled structures with a single, narrow size population. The DLS data, together with the non-aggregated particles of uniform size observed in the AFM and TEM images, provided strong evidence for the formation of the desired CSC complexes. Different generations (G2–G4) of ACCs were successfully loaded with tetrachloroauric acid (HAuCl¬4), and intramolecular phase separation was especially apparent for higher generation (G3 and G4) templates, producing a variety of morphologies including spherical, ring-like, raspberry, and core–shell metal distributions. Subsequent reduction with sodium borohydride (NaBH4) yielded aggregation-free gold nanoparticles with a size ranging from 4 to 17 nm inside the polyion complexes. Overall, the results obtained in the current investigation clearly show that ACCs, obtained in high yield by a simple self-assembly procedure using arborescent polystyrene-graft-poly(2-vinylpyridine) and poly(acrylic acid)-block-polystyrene copolymers, have great potential as templates for the preparation of metallic nanoparticles. The nanomorphologies obtained with the ACCs are comparable to those observed for arborescent polystyrene-graft-poly(2-vinylpyridine)-block-polystyrene systems in many cases. Not only the simplicity of the self-assembly approach, but also the versatility of the process enables the synthesis of a wide range of these interesting materials on a larger (multi-gram) scale, which will facilitate the investigation of their properties in relation to applications in different areas such as sensors and catalysts.