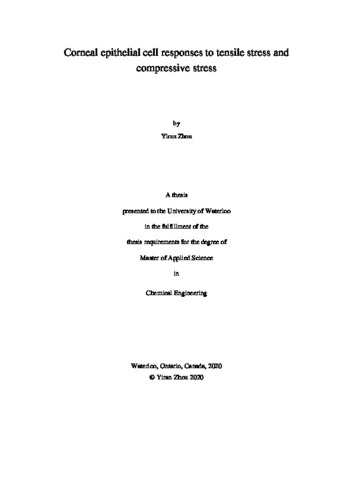 Eye rubbing is a commonly adopted habit that is frequently happening in our daily life. However, the mechanical stress generated by long term chronic abnormal eye rubbing could lead to keratoconus (KC) with the symptoms of central protrusion, high astigmatism and impaired vision, affecting 57-229/100,000 people in their twenties to forties in Asians and Caucasian population. Therefore, ophthalmologists have advised people to avoid eye rubbing to prevent KC. To better understand why eye rubbing could lead to KC, researchers have attempted to investigate corneal change under mechanical stress. However, there are two limitations in the current work: (1) the lack of a mechanical system which can simulate eye rubbing stress; (2) the lack of study on human corneal epithelial cells (HCEpCs) behavior under mechanical stimuli. To solve these challenges, we designed three models to mimic eye rubbing generated stress. The actual eye rubbing stress can be divided into in-plane tensile stress, out-of-plane- compressive stress and shear stress. To study the effect of tensile stress on HCEpCs, two customized cell stretchers were fabricated: a fluidic stretcher and an electric stretcher. The stretchers were designed to enable HCEpCs culture on a stretchable membrane or mounting of a cornea tissue, both of which can be stretched under control. The cell culture chamber size was designed to be 1cm in diameter, similar to that of human cornea. This is of great importance because it enables better mimicking of the corneal microenvironment. Calibration and cell viability test were conducted on the fabricated cell stretchers. Our results showed that the lab-built fluidic cell stretcher and electric cell stretcher were able to apply tensile stress on the cell culture membrane with the control of air pressure and linear actuator, respectively. The HCEpCs seeded on cell membrane showed altered cell viability after stretching, indicating cell response to in-plane tensile stress. To investigate how compressive stress could contribute to the development and progression of KC, a customized polydimethylsiloxane (PDMS) stamp was used to introduce compressive stress to HCEpCs. Different cyclic compressive stress (0 N/cm2, 0.03 N/cm2, 0.05 N/cm2, 0.10N/cm2 before forming tight junction and 0 N/cm2, 50.03 N/cm2, 0.93 N/cm2 after forming tight junction, a 3-minute compression was applied every 30 minutes twice and then repeated one hour later) were applied on HCEpCs monolayer. Cell behavior including cell viability, apoptosis, cytoskeleton rearrangement and cellular tight junction (Zonula occludens-1, ZO-1) expression were characterized. Cell viability and cell apoptosis analyses were conducted to determine whether the cells were alive or dead and whether they were going through programmed death, respectively. Cytoskeleton rearrangement was conducted by staining F-actin, a filamentous protein indicating how the cells would remodel themselves in response to mechanical stimuli. ZO-1 is an important protein for cellular adhesion and cell barrier function. Our results revealed that HCEpCs were sensitive to out-of-plane compressive stress in that increased cell death rate and apoptosis, change in cell membrane permeability, rearranged F-actin and loss of ZO-1 were observed under compression. Additionally, ZO-1 could protect HCEpCs against compressive stress. This was proved by the finding that 9 times higher loading could be tolerated for ZO-1-expressing cells compared with the cells without ZO-1 and cell membrane stability was also maintained by ZO-1-expressing cells upon compression. Our results provide in vitro evidence on the potential impacts from rubbing-related stress, and may shed light on understanding and prevention of keratoconus.