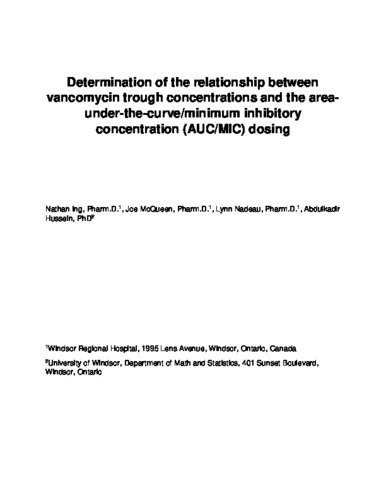 Rationale: The recently revised guidelines for the therapeutic monitoring of vancomycin recommend targeting an AUC/MIC of 400-600 for serious methicillin-resistant Staphylococcus aureus (MRSA) infections. The feasibility of transitioning from trough-based dosing to dosing by AUC/MIC warrants further study as the latter method has been shown to require additional pharmacist training and increased costs secondary to laboratory monitoring and specialty software. Methods: This was a prospective, non-randomized, single-centre trial conducted over eight months. Adult inpatients receiving vancomycin for greater than three days for the treatment of serious MRSA infections were included in the study. The AUC/MIC was calculated using two-point pharmacokinetic equations from peak and trough concentrations. The primary outcome was to determine the relationship between vancomycin trough concentrations and the AUC/MIC. Secondary objectives were to assess the difference in vancomycin doses and rates of acute kidney injury (AKI) between traditional trough-based dosing and AUC/MIC dosing. Results: 234 patients received vancomycin over the study period and 32 patients met the inclusion criteria; 36 sets of vancomycin levels were obtained. Sites of infection included skin and soft tissue (31.2%), bacteremia (21.9%), pneumonia (18.8%), osteomyelitis (15.6%) and miscellaneous (12.5%). Vancomycin trough concentrations of 10.8-16.1 mg/L correlated to an AUC/MIC of 400-600 with 95% probability (r2=0.75). The average total daily doses for trough-based and AUC/MIC dosing were 1590.28 mg and 1281.25 mg, respectively. The mean difference in dose between the two dosing strategies was 309 mg (p=0.179). There were no significant differences in the rates of AKI between trough-based dosing and dosing by AUC/MIC [OR=1.791; 95% CI (0.119,48.048)]. Conclusion: On average, vancomycin trough concentrations of approximately 11-16 mg/L correlated strongly with an AUC/MIC of 400-600, suggesting that adopting the cumbersome and costly strategy of AUC/MIC targeted dosing may be unnecessary, but further study is required. This correlation also suggests that aggressively targeting vancomycin troughs of 15-20 mg/L, as previously recommended, is unwarranted. Average daily doses and rates of AKI did not significantly differ between trough-based dosing and dosing by AUC/MIC.