Debasing Dissent: The Role of The News Media in the Devaluation of Black Canadian Activism 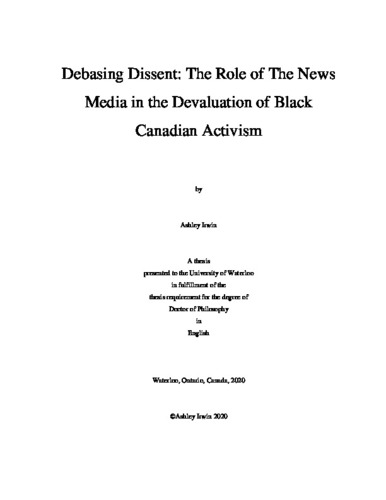 My dissertation examines the way that the Canadian news media delegitimizes anti-racist activism to contribute to the harmful national narratives of racial equality disseminated by the white Anglophone majority. I examine the discourse used to frame three instances of Black Canadian uprising, the 1969 Sir George Williams Affair, the Yonge Street Uprising of 1992, and the 2016 Black Lives Matter sit-in at the Toronto Pride parade, in the Toronto Star, the Montreal Gazette, the Globe and Mail, and the National Post. Using critical discourse analysis as a methodology and critical race theory as a theoretical lens, I argue that these newspapers utilize racist discourses by attributing the presence of activism to Black cultural and biological deficiencies. The journalists covering the Sir George Williams Affair use xenophobic discourse and raise moral alarm in order to blame the uprising on West Indian students as well as international communist organizations and the Black Panthers. These discourses situate activism as a foreign import in order to disavow the existence of racism on Canadian soil. The coverage of the Yonge Street Uprising utilizes the discourse of the minimization of racism and the discourse of dichotomies to deny the existence of racism by blaming activism on the supposed Black predisposition toward criminality. Those covering the Black Lives Matter sit-in at the Toronto Pride parade utilize devolutionary discourse, the discourse of irrationality, and the discourse of immorality to devalue activist endeavours. These discourses portray Black activists as evolutionarily inferior, unintelligent, and immoral. I historicize, conceptualize, and analyze the discourses listed above arguing that Canadian journalists recycle racist ideology that once justified and sustained the transatlantic slave trade. Exposing these ideologies will force a necessary revision of the harmful national narratives that perpetuate the oppression of Black Canadians by disavowing the existence of racism.

Ashley Irwin (2020). Debasing Dissent: The Role of The News Media in the Devaluation of Black Canadian Activism. UWSpace. http://hdl.handle.net/10012/16478