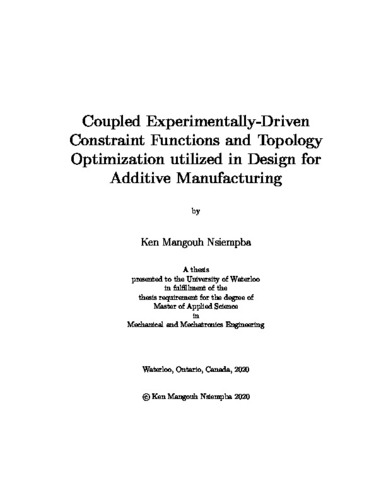 Topology optimization (TO) is a structural optimization technique that searches for the proper material distribution inside a design space such that an objective function is maximized/ minimized. Rapid prototyping technologies such as additive manufacturing (AM) have allowed results from TO to be manufacturable. However, despite advancements in their ability to manufacture complex geometries, AM technologies still face certain constraints such as printing features at overhangs (unsupported features oriented at a certain angle from the axis normal to the build plate) and small feature sizes, amongst others. In the field of design for additive manufacturing (DfAM), it is common to only restrict one constraint to control the quality of the final parts. However, several studies have found that the final quality of a feature is heavily affected by at least two coupled constraints: the overhanging angle and the feature’s thickness. Modifying a structure’s layout while restricting only one constraint can uselessly increase the weight of a structure. To tackle this problem, the work done in this thesis considers the interplay between two geometrical constraints. The proposed research reviews some of the essential manufacturing constraints in topology optimization and emphasizes the need for coupling existing constraints. It first develops experiments to obtain a qualitative and a quantitative relationship between the design features’ surface qualities, orientation, and thickness. The relation between those parameters is used to update the layout of topologically optimized structures. The layout is changed by obtaining the medial axis of topologically optimized structures and then using implicit functions to conditionally thickening it. Throughout the analysis, it was observed that both the inclination and the thickness affect the surface quality. Furthermore, the effect of the parameters is more pronounced for low thicknesses and higher overhanging angles. The overhanging angle impacts the surface quality more than the thickness, which can be seen through ANOVA.