Synthesis and Reactivity of Aryl(trifluoromethyl)diazomethane Compounds 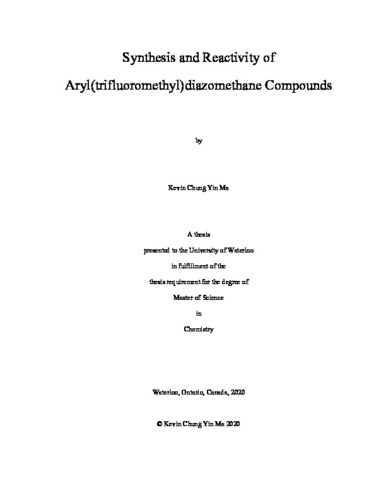 Fluorine has a prominent role in organic chemistry and the pharmaceutical industry due to the unique properties it imparts. Naturally, trifluoromethyl groups (CF3) share similar qualities and many methods have been developed for its inclusion into molecules. Historically, indirect trifluoromethylation was used until the advent of more robust direct methods. Of the three categories, direct electrophilic trifluoromethylation has grown slowly until relatively recently since the introduction of the Togni reagent, a hypervalent iodine (HVI) compound. HVI compounds have found interest as safer and cheaper alternatives to traditional metal-based reagents and benziodoxoles in particular are used for ligand transfer reactions. Diazo groups are versatile functionalities that have a wide range of applications and syntheses. Apart from diazo group transfer reagents, hydrazones and their substituted derivatives serve as common precursors to diazo compounds. The Bamford-Stevens reaction of tosylhydrazones is one efficient pathway to the formation of diazoalkanes. The trifluoromethylation of diazo compounds and hydrazones as their precursors has found limited success and exploration into this area of research could serve useful towards the production of trifluoromethylated building blocks. A simultaneous diazotization and trifluoromethylation of arylaldehyde tosylhydrazones has been found and the conditions of this procedure are explored in various venues. Discussions behind its mechanism are also speculated upon due to the formation of various side products. The reactivity and application of these trifluoromethylated diazo compounds will be investigated towards the recent rise in visible light-mediated reactions, especially for diazo compounds. The blue light photocatalysis of aryl(trifluoromethyl)diazomethane compounds is explored in the context of cyclopropanation and has seen initial success. Further investigation will prove useful in understanding this new area of photochemistry of diazo compounds.