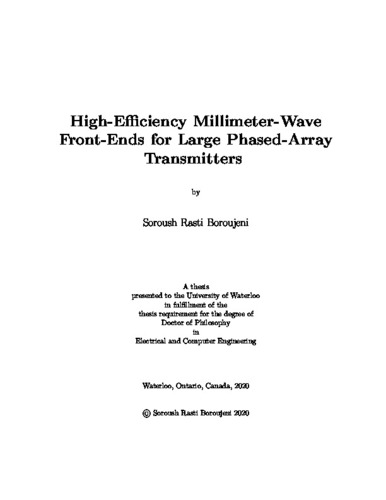 The ever-increasing demand for wireless broadband connectivity requires infrastructure capable of supporting data transfer rates at multi-Gbps. To accommodate such heavy traffic, the channel capacity for the given spectrum must be utilized as efficiently as possible. Wideband millimeter-wave phased-array systems can enhance the capacity of the channel by providing multiple steerable directional beams. However the cost, complexity, and high power consumption of phased-array systems are key barriers to the commercialization of such technology. Silicon-based beam-former chips and scalable phased-array technology offer promising solutions to lower the cost of phased-array systems. However, the implementation of low-power phased-array architectures is still a challenge. Millimeter-wave power generation in silicon beam-formers suffers from low efficiency. The stringent linearity requirements for multi-beam wideband arrays further limits the achievable efficiency. In scalable phased-arrays, each module consists of an antenna sub-array and a beam-former chip that feeds the antenna elements. To improve efficiency, a design methodology that considers the beam-former chip and the antenna array as one entity is necessary. In this thesis, power-efficient solutions for a millimeter-wave phased-array transmitter are studied and different high-efficiency power amplifier structures for broadband applications are proposed. Initially, the design of a novel 27-30 GHz RF front-end consisting of a variable gain amplifier, a 360 degree phase shifter, and a two-stage linear power amplifier with output power of 12 dBm is described. It is fabricated using 0.13 $\mu m$ SiGe technology. This chip serves as the RF core of a beam-former chip with eight outputs for feeding a 2$\times$2 dual-feed sub-array. Such sub-arrays are used as part of large phased-arrays for SATCOM infrastructure. Measurement results show 26.7 \% total efficiency for the designed chip. The chip achieves the highest efficiency among Ka-band phased-array transmitters reported in the literature. In addition, original transformer-based output matching structures are proposed for harmonic-tuned power amplifiers. Harmonic-tuned power amplifiers have high peak-efficiency but their complicated output matching structure can limit their use in beam-former RF front-ends. The proposed output matching structures have the layout footprint of a transformer, making their use in beam-former chips feasible. A 26-38 GHz power amplifier based on a non-inverting 1:1 transformer is fabricated. A measured efficiency of more than 27 \% is achieved across the band with an output power of 12 dBm. Furthermore, two continuous class $F^{-1}$ power amplifiers using 1:1 inverting transformers are described. Simulation results show a peak-efficiency of 35 \% and output power of 12 dBm from 24 to 30 GHz. A common-base power amplifier with inverting transformer output matching is also demonstrated. This amplifier achieves a peak-efficiency of 42 \% and peak output power of 16 dBm. Finally, a low-loss Ka-band re-configurable output matching structure based on tunable lines is proposed and implemented. A double-stub matching structure with three tunable segments is proposed to maximize the impedance matching coverage. This structure can potentially compensate for the antenna impedance variation in phased-array antennas.